A new method of assessing atrophy progression in Alzheimer's disease 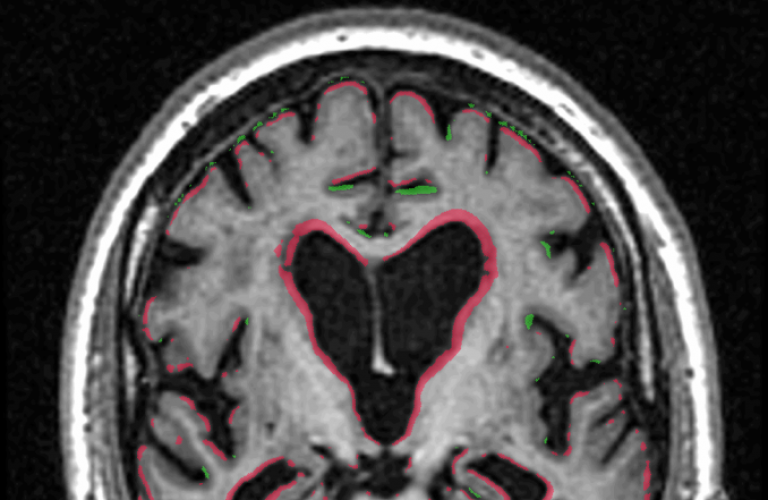 UCL's Boundary Shift Integral technique has changed the way pharmaceutical trials in Alzheimer's disease are conducted and has become the industry standard. These methods are more accurate than the previous manual measures they have largely replaced, and have also had significant benefit to the UK economy.

Since the mid-1990s, research at the UCL Institute of Neurology led by Professors Nick Fox and Martin Rossor has focused on improving diagnosis and the measurement of disease progression in Alzheimer's disease and related disorders. They initially began describing brain changes to improve diagnosis: cerebral atrophy had long been recognised as characteristic of Alzheimer's and research showed that certain regions (e.g. the hippocampus) were reduced in volume very early in disease progression.

Professor Fox and colleagues developed a novel technique (the Boundary Shift Integral) for quantifying these changes in brain volume from rigid-body registration of serial magnetic resonance imaging (MRI). They were able to show that the method had a very high level of precision - ten times greater than previous methods.

We desperately need to find treatments that can delay the onset or slow the progression of Alzheimer's disease - I hope that the methods we have developed will help identify which potential treatments show the most promise of being effective and should go forward into larger clinical trials. - Professor Fox

In a decade of subsequent research this technique was developed and validated in collaboration with Dr Kelvin Leung and Professor Sebastien Ourselin (UCL Centre for Medical Image Computing). Not only have these methods found diagnostic clinical use, they have been adopted for use in monitoring disease progression and assessing therapeutic effects in trials designed to show disease modification.

The Boundary Shift Integral method has provided a precise, regulatory-compliant means of assessing whether a potential treatment for Alzheimer's disease could modify the disease course by slowing the rate of atrophy. It has therefore had a significant impact on clinical trial protocols by reducing the number of patients needed for imaging outcomes, thus reducing costs and reducing participant exposure to potential side effects. The techniques have also been shown to be useful clinically - individuals with very early Alzheimer's disease show increased rates of brain atrophy relative to healthy controls.

The Boundary Shift Integral has become the most widely used method of analysing brain atrophy in trials in Alzheimer's disease and in related disorders. Previously trials relied on manual methods to monitor atrophy. These were both labour intensive and error prone. The image analysis methods, developed at UCL, removed the need for these manual measurements and greatly improved both precision and reliability. This has led to the Boundary Shift Integral being the method of choice for many Alzheimer's disease trials (and now other diseases). Trials using UCL's techniques include most recently the largest international immunotherapy trials in Alzheimer's disease led by Elan/Janssen and Pfizer/Wyeth in 2007-2012.

These techniques have also brought economic benefits for the pharmaceutical industry and associated companies. The use of image analysis allows trials to be conducted using far fewer subjects than would have been needed to power a study using clinical outcomes. This has effectively reduced the cost of clinical studies.

Funders included the Alzheimer's Society and the MRC.