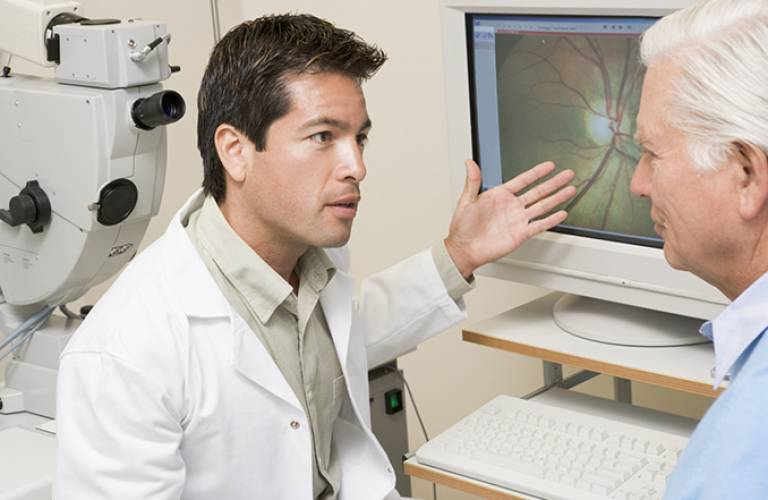 Glaucoma - pressure in the eye damaging the optic nerve - affects 70 million people worldwide, and is the most common cause of irreversible blindness. In many parts of the world, surgery to reduce pressure in the eye is the only practical treatment. There may be significant complications associated with surgery, and research at the UCL Institute of Ophthalmology and Moorfields Eye Hospital over the last 25 years has led to improvements in surgical techniques and drug treatments to increase the effectiveness of surgery.

Scarring during healing after surgery is the most common cause of the failure of surgical procedures to treat glaucoma. Laboratory and clinical research from UCL and other centres from the early 1990s onwards pioneered the use of anti-cancer agents during surgery to reduce scarring during wound healing. This work established that using the drugs during surgery was just as effective as the series of post-operative injections, which was then the standard treatment. The increased benefit to patients and reduction in costs has enabled the treatment to be extended widely, particularly in developing countries.

It has significantly impacted both general ophthalmologists and glaucoma specialists. This has improved the standard of care and also the quality of life of glaucoma patients across India. - Professor Tanuj Dada, All India Institute of Medical Sciences.

Although improving outcome, the use of these anti-cancer agents is associated with significant complications. Building on their early laboratory and clinical studies, along with extensive clinical experience, Professor Sir Peng Tee Khaw and colleagues went on to develop the Moorfields Safer Surgery System - a series of simple changes to surgical techniques combined with a modified method of drug delivery and the development of improved surgical instruments.

The Moorfields Safer Surgery System is relatively inexpensive, and can be accessed by most surgeons around the world, including those in lower-income countries. This has enabled the system to spread widely, and it is now used around the globe. In India, for example, the system is being adopted across major ophthalmic centres.