Monitoring the impacts of fire 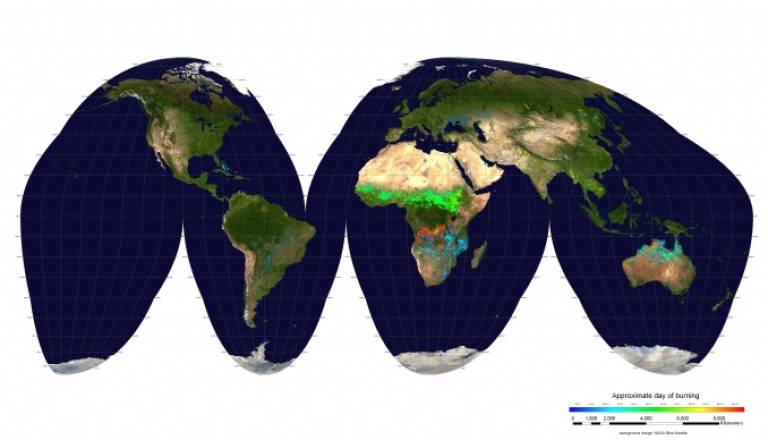 A model developed by UCL researchers, which uses satellite data to monitor areas burned by fires, delivers data via NASA which are used by the Food and Agriculture Organisation and other organisations around the world for fire and land management, including in the USA, Australia, Brazil and South Africa.

Fire has significant impacts on forestry, agriculture and health, as demonstrated almost every year by major forest fires in Australia, Indonesia or the United States. They are a major source of natural and anthropogenic change to the land surface. Approximately 4.64 million square kilometers of land are burned each year, releasing 2.5 petagram of carbon into the atmosphere. Land management and preparedness planning both require a good understanding of fire patterns. However, fires are hard to monitor due to their dynamic, unpredictable nature. Moreover, they often occur in remote areas where there is no one to monitor their extent before regrowth disguises their traces. Whilst fires that are actively burning may be detected from satellites, 90% are missed because satellites do not pass overhead at the right time.

Areas blackened by fire reflect less solar radiation than green vegetation. From their prior work developing a model which uses data from the MODIS instrument on two NASA satellites to provide a global albedo product, from 2000 onwards Professor Philip Lewis and Senior Lecturer Dr Mathias Disney (UCL Geography) devised a similar product which uses the changes in surface reflectivity to model burned areas. This is now provided by NASA through the MODIS Fire Centre at the University of Maryland.

In 2010, the Burned Area product became a core part of the Food and Agriculture Organisation's Global Fire Information Management System (GFIMS), which delivers data to national monitoring and emergency response projects. The product is widely used by park and natural resource managers to monitor fire and the data are used to plan management and rehabilitation, and for preserving and enhancing biodiversity.

For example, the United States National Interagency Fire Center relies on the MODIS Burned Area product via the GFIMS to develop aggregate records of the extent of fires, complementing data on active fires. It provides these data to its constituent agencies (e.g. the National Park Service or the US Forest Service) to use in developing land and fire management plans. The Forest Service then uses these data to generate burn scar maps. Similar organisations in Australia (Landgate FireWatch) and Brazil (INPE) also generate burned area maps for use by emergency services, using MODIS data from GFIMS.

A long-running example of the vital contribution of this product is at Kruger National Park, a 19,000 square kilometre game reserve in South Africa where fire is integral to the savannah ecosystem. Here, the National Parks Service has used the Burned Area product since 2006 to map burned areas. Where unreported fires are detected, rangers are sent to assess the fire impacts on the ground and feed these data back into the park fire information system. This has, over the years, improved mapping accuracy and captured the patchiness in burned areas, thus preventing over-estimation of burned areas and mapping their heterogeneity. By assessing the impact of fire over time on the park's flora and fauna, the park management can make informed decisions about fire management to maintain its fragile ecosystem and maintain biodiversity.

In 2008, researchers led by Dr Disney and Professor Lewis expanded this product further by collecting data about fires on the ground at Kruger National Park. This enabled the UCL team to model the effects of fire on a landscape. This detailed model is now being used to validate simpler models and explore the effects of different fires, to further support the use of the Burned Area product in land and fire management.