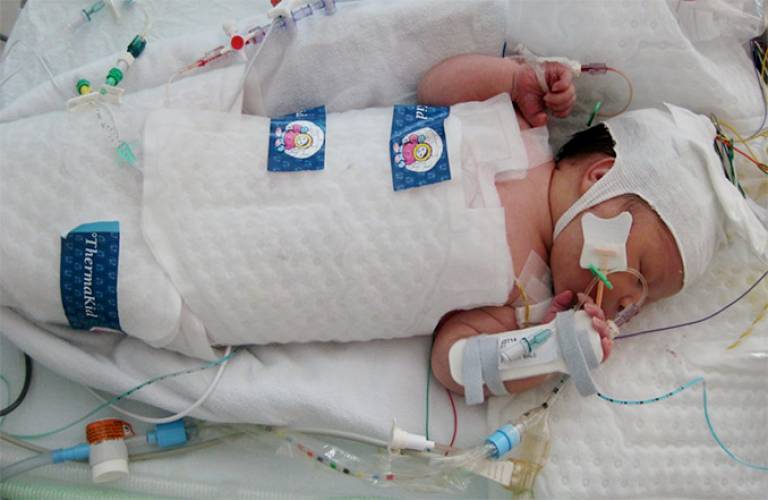 Early laboratory work at UCL investigated the mechanisms by which cooling can prevent brain injury in newborn babies who have suffered a shortage of oxygen or blood supply to the brain around the time of birth. This underpinned clinical trials undertaken at UCL and elsewhere, which in turn have resulted in therapeutic hypothermia becoming standard care for infants with moderate to severe neonatal encephalopathy.

Hypoxic-ischaemic encephalopathy (or perinatal asphyxia) is one of the three main causes of death in newborn babies. It occurs when a baby suffers a shortage of oxygen or blood supply to the brain around the time of birth. It is fatal or leads to long-term brain damage, cerebral palsy, epilepsy and other significant cognitive, developmental and behavioural problems in around 50% of affected babies. Between 750 and 1,125 infants in the UK are affected every year, and the human and financial costs to these infants, their parents, professionals and wider society are enormous.

Since the early 1980s, UCL researchers have carried out extensive experimental and clinical research into the mechanisms behind these problems. Professor Osmond Reynolds and his team were struck by data showing that the infant's brain is normal in the hours after asphyxia, and cell death only occurs several hours later. Delayed brain injury (called "secondary energy failure" by Professor Reynolds) was a critical new idea, and opened the possibility of therapeutic intervention in what had previously been considered an impossible situation. A key breakthrough came in 1995 when the UCL team used whole-body cooling to treat piglets in the period just after hypoxia-ischaemia, and showed that this improved or prevented secondary energy failure, and reduced brain cell death.

Studies in Sweden and New Zealand confirmed these results, and the first clinical trial of therapeutic hypothermia - the multicentre CoolCap Trial - began in 1999 under the leadership of Professor John Wyatt (UCL Institute for Women's Health) and Professor Peter Gluckman (University of Auckland). The results (published in The Lancet in 2005) were encouraging, and prompted the approval of the CoolCap device by the US Food & Drug Administration in 2006. It is now in use in 30 hospitals across the United States (many of them covering a wide geographical area, due to the specialist nature of the services provided).

Meanwhile, other studies of cooling also built on the early lab work, including a major study run by the National Institute for Child Health and Human Development, which showed a significant effect of cooling. In the UK, total body hypothermia for neonatal encephalopathy trial also showed remarkably consistent results.

Data collected since 2006 has shown a steady rise in the uptake of therapeutic hypothermia across the UK as the treatment has been gradually adopted into normal clinical practice. "Cooling therapy has revolutionised the treatment of babies with perinatal asphyxia and it is now routine in the UK," says Professor Robertson. In 2010, the recommendation for therapeutic hypothermia was incorporated into National Institute for Health & Care Excellence guidelines. The British Association of Perinatal Medicine also recommended this treatment in guidelines issued in the same year. By 2012, over 3,000 babies had been cooled at 74 different neonatal units.

The impact on long-term outcomes for these babies is clear. A recent meta-analysis including seven trials and 1,214 infants shows that therapeutic hypothermia results in a reduction in death or major neurodevelopmental disability and an increase in the rate of survival with normal neurological function at age 18 months. Over 3,000 babies have now been treated, and 450 are estimated to have avoided death or serious neurological disability between 2006 and 2012.

A health economic study done by Imperial College London set out the clear economic case for this treatment. Using current lifetime costs for each child with cerebral palsy (about £750,000) and the economic benefit of additional healthy lives (£800,000), the total benefit to the UK economy as a result of the implementation of therapeutic hypothermia is likely to be over £125 million so far.