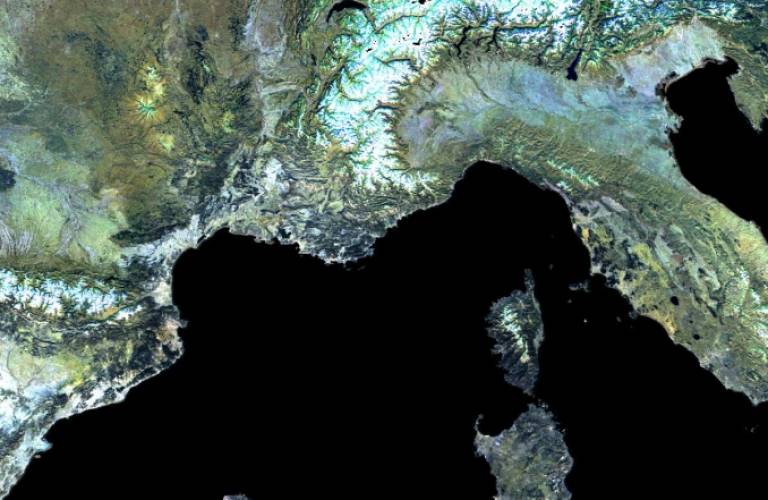 Albedo is the reflectivity of the earth's surface - the darker the surface, the less solar energy is reflected. It varies as a result of natural processes, such as snowfall or vegetation growth. Manmade deforestation, afforestation and desertification can lead to dramatic changes in reflectivity, which in turn influence the amount of solar radiation absorbed. Long-term observations of albedo are thus an important contribution to both climate and weather monitoring, but converting satellite observations of reflected sunlight into albedo requires models of how surface reflectance changes over time.

Researchers from UCL worked with NASA colleagues to develop an algorithm which uses data from MODIS instruments on two NASA satellites to provide a global albedo product. Critically, Prof Philip Lewis (UCL Geography) demonstrated that albedo models could be made linear, drastically increasing efficiency and providing uncertainty estimates as a by-product (critical in the adoption of the product in climate forecasting). Prof Lewis and senior lecturer Dr Mathias Disney (UCL Geography) worked to implement and test this in collaboration with Boston University. With Professor Jan-Peter Muller (UCL Space and Climate Physics), they later developed this further into GlobAlbedo, a new albedo product based on European satellite data for the European Space Agency (ESA).

In 2009, the Food and Agriculture Organisation (FAO) identified MODIS albedo as a key component of the Global Terrestrial Observing System, which defines the protocols and standards for monitoring and measurement to facilitate global agreement on how to manage environmental change. In Norway, for example, the government's advisory agency on climate change, CICERO, uses the GlobAlbedo data to analyse the effects of manmade changes to vegetation.

It's very pleasing to see how these albedo products are now benefitting a wide range of people, from the general public through to policymakers, by allowing improvements in weather forecasting, and climate modelling, among other things. - Dr Mathias Disney

The albedo product is also used to improve Numerical Weather Prediction (NWP) models, which are vital to policy and commercial decisions relating to weather events. In 2007, the European Centre for Medium-Range Weather Forecasting (ECMWF) incorporated the MODIS albedo product into its forecasting system, which improved its forecasting capability demonstrably. ECMWF forecasts are provided to other agencies, such as the UK Met Office which uses it to develop short- to medium-term forecasts, e.g. of severe weather. In 2007 the Met Office started using MODIS albedo in its own NWP suite and from 2013 upgraded to GlobAlbedo. This, said Dr Malcolm Brooks of the Met Office, could "give more accurate temperature forecasts over the United States and Asia, especially in summer" and is to become operational in 2014.