A groundbreaking name classification tool is used by healthcare organisations and local government to deliver targeted services to specific ethnic groups, and in ACORN, the major commercial geo-demographic classification service. It is used to create an online and physical tool to engage the public with ideas of identity and genetics. 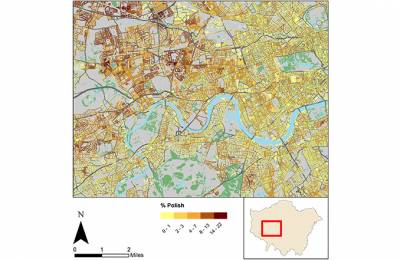 Names are a valuable link to family history and to cultural heritage, and can thus have important applications to understanding migration and population structures. Since 2003, research led by Professor Paul Longley (UCL Geography) has investigated the geographical concentrations of names in the British Isles and beyond, and devised methods to analyse this data for a range of commercial and public sector applications.

For example, Onomap allows users to classify lists of names into groups with common cultural, ethnic and linguistic origins. This product emerged from groundbreaking collaborations with two primary care trusts in ethnically diverse London boroughs, through which names classification tools were developed to improve ethnicity designations in Camden's medical records, and targeted public health initiatives in Southwark. Based on this collaboration, Southwark PCT in 2011 hosted a pilot project to increase rates of breast cancer screening amongst women of Afro-Caribbean descent using names classification tools to identify the ethnic groups of women who missed screening.

Between 2008 and 2013, over 15 Primary Care Trusts (PCTs), local authorities and other government organisations have licensed the tool; for example, in 2011-2012 the Health Protection Agency (now Public Health England) used it in a sentinel survey of hepatitis and other blood borne viruses, while NHS Lothian licensed it in 2010 to assess access to public health services such as smoking cessation.

Amongst the most widely used commercial geo-demographic classifications in the UK is ACORN, developed by CACI Ltd. This is used by over 500 organisations seeking effective communication with target groups, e.g. for advertising or public services. In 2013, CACI released a new version of ACORN which used the names classification in conjunction with census sources to provide a more differentiated source of ethnicity information than had hitherto been possible.

Interest in genealogy and family history has made this research a unique means of reaching a wide international public. Associated websites (worldnames.publicprofiler.org and gbnames.publicprofiler.org) allow individuals to map the distributions of their family names and were accessed by over 4 million people in 2008-2013 alone. Related projects, including a Twitter names map of London, and a map of surname distribution in the United States, have been used by the Guardian and National Geographic respectively. Members of the public can also view the cultural, ethnic and linguistic classification of their names at www.onomap.org.

This highly engaging work continues to demonstrate that a fundamental part or 'who' we are is 'where' we are. Geography is key to understanding population health, social mobility and family histories. - Professor Paul Longley

Capitalising on the public interest in this research, Professor Longley's team worked with major national museums to develop interactive exhibits which raise questions of identity and genetics for a wide public audience. Exhibits have appeared at museums in Bristol, Liverpool, Manchester, Glasgow and Birmingham, and have featured at the London Science Museum, which receives 2.7 million visitors per annum. In 2012, the research was selected for display at the Royal Society's Summer Exhibition. Today, much of the ongoing work is also spearheaded by Dr James Cheshire, who joined UCL Geography as a lecturer in September 2014.

Funders included the ESRC, EPSRC, and KTPs with Camden and Southwark PCTs.