Lisbon and its Jewish refugees: Engaging Portugal with its World War II history 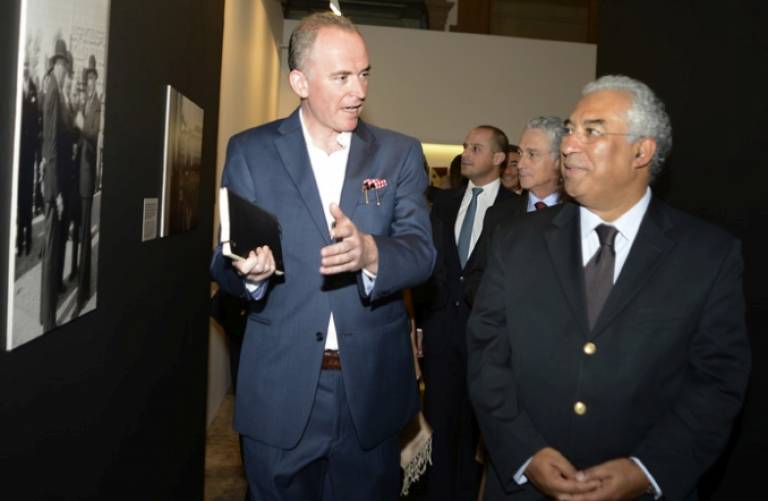 Through an important exhibition in Lisbon and a bestselling publication, Professor Neill Lochery's research shone new light on the role played during World War II by this so-called 'open city', particularly as an exit point for refugees escaping to North America or Palestine.

During World War II, Portugal, under the dictator Antonio de Oliveira Salazar, maintained a policy of 'flexible neutrality'. The precise nature of this policy, and its impacts particularly on the Jewish refugees who streamed through Lisbon's port to the New World and to Palestine, have rarely been examined, especially in Portugal itself.

Drawing on his expertise in archival research with British Foreign Office records, Professor Neill Lochery (UCL Hebrew & Jewish Studies) investigated the role played by Portugal as a neutral power during World War II, its treatment of refugees, and its emergence from the war financially better off than at its start. Examining some 50,000 unpublished documents held in both public and private archives in the United Kingdom, Portugal and the United States, Professor Lochery traced the passage of thousands of refugees through Lisbon, and the failings, from 1940 onwards, of international Jewish rescue groups to accommodate them. Finally, he examined the post-war negotiations over German gold payments for wolfram, a mineral used in manufacturing armaments, of which Portugal had large deposits.

This work appeared as a book, Lisbon: War in the Shadows of the City of Light, in 2011. Originally published in English, it was translated into Portuguese in 2012. The book received instant critical acclaim inside and outside the country, as a unique contribution to Portuguese readers' understanding of this important time in history, the Wall Street Journal saying that the book "traces the subtlety of [Salazar's] manoeuvring with clarity and precision".

In 2012, Professor Lochery was invited to hold a photographic exhibition at the gallery of the Camara Municipal de Lisboa (Lisbon City Hall), opened by the Mayor of Lisbon and sponsored by a group of public and private sector supporters. During its run, the exhibition received an estimated 10-14,000 visitors, including organised school groups. The exhibition itself was widely covered in the Portuguese press and broadcast media. Originally planned for four weeks, the demand led to its extension to seven weeks.

By the end of 2013, the Portuguese translation of the book was in its fourth edition and had appeared in Australia, New Zealand, Brazil, Poland, Spain and Latin America, and Professor Lochery had received repeated invitations to talk to schools, universities and the general public about the topic. In 2014 the United States World War Two Museum commissioned Professor Lochery to present a special event and exhibition based on the book for its 70th anniversary commemoration of the D-Day landings in Normandy.

" This exhibition... is the perfect complement to one of the most important books written about the recent history of our magnificent city. Neill Lochery extends the importance of the subject portrayed in his book to a very rich collection of documentation that takes us on a journey through the past. - Francisco Espadinha, Managing Director, Editorial Presenca