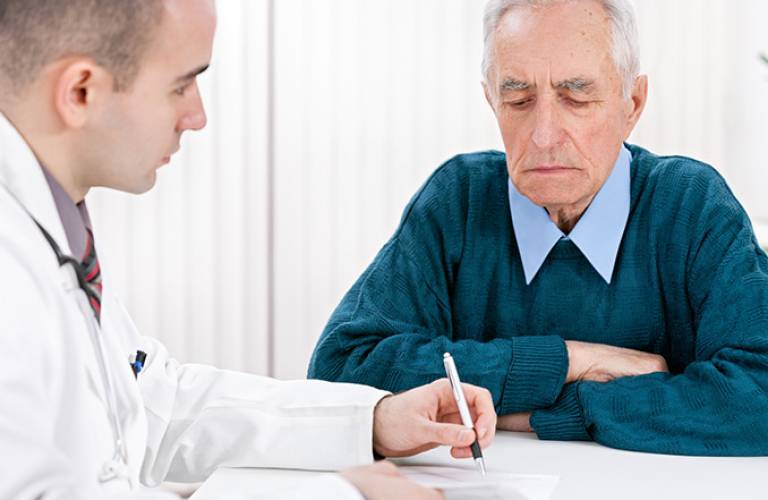 Professor Paul Burgess invented and co-invented several cognitive tests used to detect dysfunction of the frontal lobes of the brain. These tests are now used in clinics worldwide to improve the diagnosis and clinical management of around 55,000 patients per year with neurological, psychiatric and developmental problems.

Every year in Britain, many hundreds of thousands of individuals experience neurological problems resulting from strokes, head injuries, tumours and so on. The measurement of cognitive deficits resulting from frontal lobe damage and collectively known as 'dysexecutive symptoms' is a major issue in the treatment of these patients, who may suffer a wide range of cognitive disabilities.

Whilst good measures of intellectual and memory functioning, visual perception, language, and motor skills are well established, clinicians did not have access to comparable psychometric tools to measure dysexecutive problems. At the UCL Institute of Cognitive Neuroscience, research into differences in the mental capacities supported by different sub-regions of the large brain region known as the prefrontal cortex has been used by Professor Burgess to develop a suite of psychometric tests to meet this unfulfilled clinical need.

Work to develop these new tools was conducted in two distinct programmes. The first established the fact that three of the most common symptoms of frontal lobe dysfunction (response suppression, response initiation and rule attainment), which had been hitherto thought to co-occur as part of a syndrome, were in fact quite distinct. As such, effective screening for frontal lobe dysfunction requires their separate examination. However, there were serious flaws in the existing measures of both response suppression and rule attainment, and no measure at all for response initiation. Professor Burgess developed the Hayling and Brixton texts to redress this problem by providing an effective, separate test for each of these three factors.

The second research programme led to the invention of psychometric instruments aimed particularly at predicting everyday handicap in people with neurological problems. The work, which was conducted in collaboration with researchers at the MRC Cognition and Brain Sciences Unit (Cambridge), Glasgow University and St Andrew's Hospital, Northampton, delivered the BADS test battery, a suite of psychometric tests that can be administered together to gain an overall diagnostic picture of dysexecutive problems. Like the Hayling and Brixton Tests, the BADS battery quickly proved better than existing tools, both at detecting problems in the clinic and at predicting handicap in everyday life. As a result, it also gained widespread acceptance as a standard diagnostic instrument.

The clinical utility of the tests within the BADS battery has, moreover, proved wider than their original intended use. In 2003 a second version of the battery (the BADS-C) adapted for use with children was produced. In 2007 a study also found that three specific BADS battery sub-tests were useful in predicting on-road performance among people who had suffered some form of neuropathology. These were subsequently fully developed though a collaboration with Pat McKenna, Consultant Neuropsychologist at Rookwood Hospital, Cardiff and incorporated into a set of tests designed for driving assessment. The so-called Rookwood Driving Battery was first marketed commercially in 2009 and is the only tool of its kind available in the world.

All of these diagnostic instruments are now very widely used by clinicians to determine whether patients with neurological problems are suffering from dysexecutive symptoms. The test publisher, Pearson Assessment, suggests that average sales of these products indicate that the tests are administered to approximately 55,000 patients per year. All of the tests are sold around the world and the BADS suite has been translated into six languages. Such is their popularity in the UK that instruction on these tests is now integrated as standard into the professional training of practitioners including clinical psychologists, occupational therapists and psychiatrists.

Test results are used primarily to guide patient treatment and to make decisions relating to the degree of handicap resulting from neurological damage. This might include decisions, for example, about whether patients should return home to live independently and about whether they should be left to manage their own finances.

However, the impact of these diagnostic procedures has also extended beyond the clinic, including to their use in legal practice. In New South Wales, Australia, for example, the Offender Assessment Unit recommends the Hayling and Brixton tests for measuring executive function in offenders, a measure that can have an important bearing on judgments of a defendant' responsibility or otherwise for their actions.