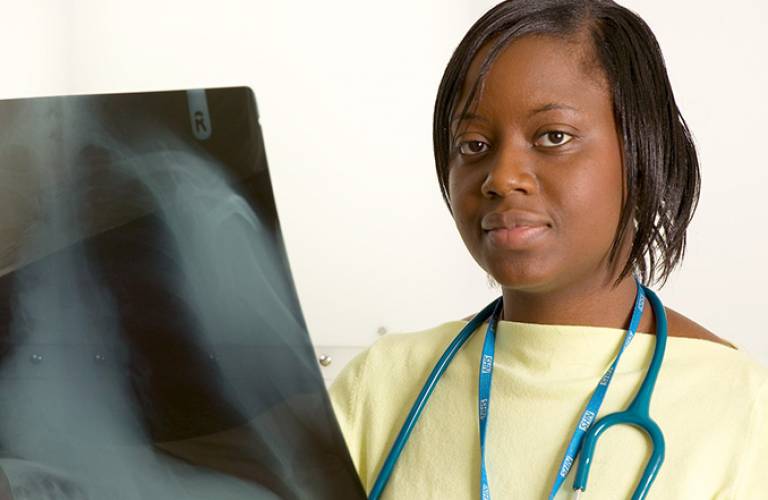 Social class remains a persistent barrier to careers in medicine for many academically able young people. Research conducted at UCL has underpinned the development of a free widening-participation programme for young people from non-selective state schools. Since 2007 more than 800 pupils have taken part in it.

UCL research has demonstrated serious inequalities in access to medical education. Social class is a persistent barrier, with academically able young people from social class I being 100 times more likely than those from classes IV or V to win a place at medical school. When class and ethnicity are combined this discrepancy becomes still more pronounced, standardised admissions ratios showing a 600-fold variation, with black men from classes IV and V particularly seriously under-represented. Indeed, the research revealed that between 1996 and 2000, UK medical schools did not admit a single black man from social class V.

Medical schools' failure to recruit talented young people from such backgrounds is bad news not just for students, but also for schools themselves, which subsequently lack representative role models. This reduces the quality of the service offered by medical schools and, later, by healthcare providers in their professional engagement with the UK's very diverse communities. Ultimately, therefore, it impacts negatively on the NHS, on patient care, and on the medical profession as a whole, perpetuating its stereotyping as elitist and unrepresentative.

Target medicine helped me achieve more than I ever thought I could. I was the first person in my family to ever even consider going to university, let alone become a doctor. - Target Medicine participant

In 2004 the UCL research team used focus groups at six North London schools to assess attitudes to medical school among 68 academically able students aged 14-16 from selective and non-selective schools. Those from 'non-traditional' (low-income and/or ethnic minority/refugee) backgrounds were found to have little idea about either the process of applying to medical school or what was taught there. The research recommended modifications to existing widening-participation ventures to support their more effective targeting of the most economically and socially deprived areas, particularly through increased community input and the incorporation of credible role models as mentors.

In 2005, the team responded to these recommendations itself by establishing the 'Dick Whittington' project, a one-week summer school set up to encourage students from schools in relatively deprived areas to consider a health-related career. Subsequent research with participants in that project showed that, whilst they found information about medical careers and the process of applying to medical school helpful it was not, by itself, enough to support a successful application. Instead, students needed ongoing support to access appropriate work experience, write personal statements, and develop and practise interview skills.

In 2008, the research was used to launch Target Medicine, a mentoring, outreach and summer school scheme for students from non-selective state schools in London. Between 2008 and 2013, Target Medicine mentored a total of 860 students from 171 schools and now guides around 200 Year 12 and Year 13 pupils through the medical school application process each year. The programme incorporates a comprehensive sixth form mentoring scheme, in which current medical students - many from non-traditional backgrounds themselves - are trained to guide participants through the process of applying to medical school. The scheme's value to participants is evident from their feedback on it. When participants in the 2010/11 mentoring scheme were surveyed in 2012/13, 11 of the 38 respondents reported that they are now studying medicine.

As well as improving the chances of individual participants' success in applying to medical school, Target Medicine also has broader implications for the standards of UK healthcare provision. In particular, it helps to increase the social diversity of medical student cohorts; as such, it contributes to the development of a medical profession that better represents the population it serves.