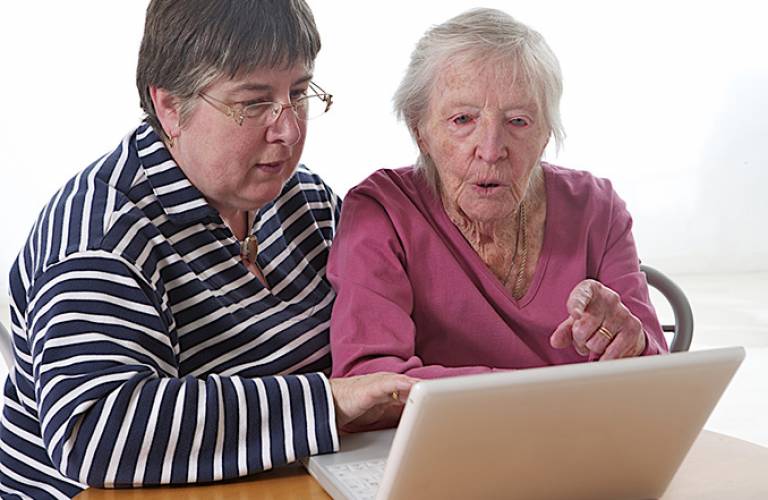 Dr Alexander Leff (UCL Institute of Neurology) is a world expert on the visual field defect hemianopia. His early work in this area included the use of a placebo-controlled trial to demonstrate that hemianopia patients whose text reading was affected could benefit from the use of moving text.

This was not, in fact, an entirely new discovery: at least three peer-reviewed articles, the first dating back to 1993, had already suggested the therapeutic efficacy of moving text for patients with hemianopic alexia. Despite this, however, the therapy had still not been made widely accessible to suitable patients.

The successful outcome of his own trial encouraged Dr Leff to turn to the UCL Multimedia team for advice about how best to extend the accessibility of this important therapeutic tool - which had, for the purposes of his own study, been distributed via VCR tapes - to a broader group of suitable patients. The team suggested using the internet, and a collaborative programme of work began to produce a patient-friendly version of the moving-text tool that could be used without the help of a healthcare professional. Two questions soon presented themselves. First, how would patients coming to the resource independently even know whether they had the condition? And second, how would they know if the therapy was working for them? To address these questions, Dr Leff added an online visual field test and interval tests of reading ability to the site design. A grant from The Stroke Association supported the subsequent development of the Read-Right website as both a therapy and a research tool.

Read-Right has restored my self-belief and allowed me to take control of my own recovery. - A patient

Patients with hemianopic alexia, recruited from Dr Leff's NHS hemianopia clinical service at the National Hospital for Neurology and Neurosurgery (University College London Hospital), also played a vital role in the design of both the Read-Right and, later, the Eye-Search website. Between 2008 and 2013, 42 patients with hemianopia 'beta' tested various components of each application. Many more (~100) were involved in online testing. Patient feedback on Read-Right rates the site at 7.7/10 and reports an increase in reading of between 30 and 60 minutes per day.

Read-Right went live in 2010; by 2013 it had received 16,703 unique visitors, generating 177,078 page views from 30,878 visits. 657 patients with hemianopic alexia had used the site. Dr Leff's initial visual field test was validated in a 2011, analysis of the Read-Right patient data demonstrating significant therapeutic effects (a clear dose effect of 46% after 20 hours of practice). The results were published in 2012 with an accompanying editorial commentary on 'internet teleneurology'.

Following the success of Read-Right, Dr Leff returned to The Stroke Association for support to work on a new, more ambitious therapy site targeting a problem common to almost all hemianopia patients: difficulty finding things. The resulting Eye-Search therapy web app, which involves finding a ball that jumps semi-predictably into the affected visual field, has been shown to deliver improvements in visual search speeds in patients with hemianopia. Eye-Search went live in 2012; by 2013 it had had 3,090 unique visitors generating 37,885 page views from 7,281 visits. An impressive 57.5% of visits were returning visitors and 217 patients with hemianopia had used the site.

Both websites contain clinically proven therapeutic interventions that have been trialled in phase II studies. The data collected from patients using the applications are akin to a phase IV clinical trial, showing real-world efficacy outside the close monitoring that occurs in smaller trials. This is the first time that web-based therapies for neurological conditions have been proven to work.