Linear (2010), by Dryden Goodwin, was one of the most successful art commissions by Transport for London's Art on the Underground. It engaged commuters with contemporary art while raising the visibility of Underground staff and, consequently, improved staff morale.

Almost since its inception, London Underground has been associated with visual art, starting with its distinctive roundel and typeface, and commissioned posters by leading artists since 1908. In 2000, London Underground launched the precursor of Art on the Underground to provide a programme of contemporary art for customers, staff and London's communities.

In 2010, Goodwin (UCL Slade School of Fine Art) was commissioned to create Linear, a series of portraits of London Underground staff. This was based on his long-standing interest in the use of portraiture to investigate the experience of the contemporary city, and reflection on notions of public and private and the relationship between anonymity and intimacy. An earlier installation, 12 Portraits, commissioned for the BS1 retail centre in Bristol, included small etched portraits of those who worked on the development. For London Underground, Goodwin drew 60 pencil portraits of Jubilee Line staff, filmed the process, with recorded conversations with the sitters. The portraits were placed in Jubilee Line stations and the videos were exhibited online. 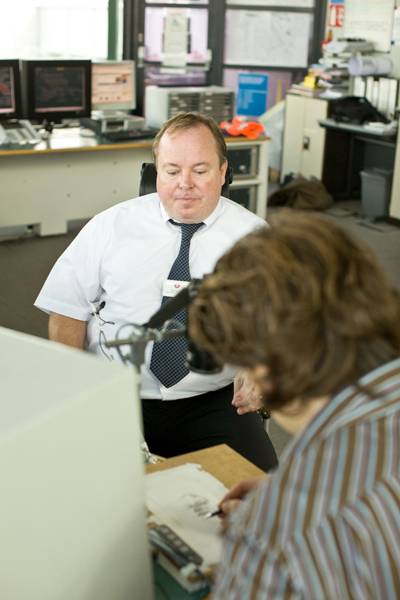 Over 4 million people travel through on the Tube every day. Goodwin's portraits were widely exhibited across the network, through posters, leaflets and exhibitions and the major London Bridge, Southwark and Stanmore stations. Screenings and presentations followed at the National Transport Museum, Canary Wharf and the National Portrait Gallery, as well as a major group exhibition at London's City Hall titled Everything is Connected. So successful was the work that its run was extended by over a year to 2012.

Linear helped humanise Underground staff to their customers, and presented them as individuals with distinct stories and personalities. Viewers were invited to 'unlock the drawings' by watching the videos online, and thousands did so; as a comment on the project site observed, "It is also a good reminder to us of the people behind the uniforms."

At a time of cutbacks, this provided a huge boost to staff morale, and was described as "the best piece of work we've achieved in humanising our staff" by the Head of Customer Service Strategy. Even in 2013, a year after the project ended, sitters reported how it helped them feel valued. In 2013, Linear was included in the London Transport Museum's exhibition of the London Underground's greatest designs, as part of its 150th anniversary celebrations.

Linear inspired Breathe: an 8-foot tall animation projected on St Thomas' Hospital, facing the Houses of Parliament. This image, the animated portrait of a child breathing, was a unique intersection of Goodwin's art with the work of the environmental scientist Frank Kelly, humanising both the science and the public health concerns around urban air pollution.

Gripping, thought-provoking and evocative of life in the big city. - Jonathon Jones reviewing Linear in the Guardian