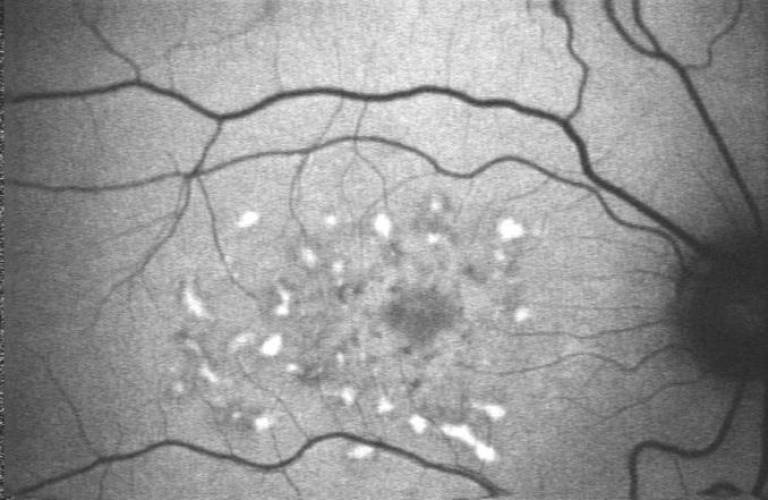 Imaging techniques pioneered at UCL have transformed clinical practice relating to retinal disease, allowing earlier detection and monitoring, and supporting the development of new, more effective therapies. As well as its obvious benefits to patients and practitioners, the research has delivered financial benefits to companies producing the new imaging equipment.

Age-related macular degeneration (AMD) is the leading cause of visual impairment in the UK, where some 462,000 people are affected to some degree. The accumulation in cells of the eye of the so-called 'age pigment' lipofuscin has long been known to be critically implicated in the pathogenesis of AMD and other forms of retinal disease, although understanding of this phenomenon was limited until the 1990s by the fact that it could only be observed through post-mortem studies. However, revolutionary imaging techniques pioneered at UCL have supported extraordinary advances in our understanding of retinal diseased by allowing researchers to observe this cell accumulation process in the living eye, too.

Since we first demonstrated Fundus Autofluorescence Imaging in 1995 our technique has been taken up by leading ophthalmic centres throughout the world and it is estimated that 1,000,000 patients annually benefit from this form of imaging the eye. - Professor Fred Fitzke

Work allowing this visualisation of lipofuscin in the living eye was at the UCL Institute of Ophthalmology by Fred Fitzke and Alan Bird, who pioneered the technique of Fundus Autofluorescence (FAF) Imaging. Their first FAF images were published in 1995, providing high-resolution imaging of the distribution and levels of FAF attributable to specific molecular species involved in the pathogenic mechanisms of AMD, hereditary retinal degenerations such as retinitis pigmentosa and other blinding diseases. With colleagues at Moorfields Eye Hospital, the UCL team pioneered the use of this technique, demonstrating the enormous value of FAF in diagnosing many retinal disorders, including inherited retinal degenerations and age-related macular degeneration. Since then, an intensive, worldwide research effort has drawn heavily on their work in its efforts to study FAF and understand the fundamental pathophysiological processes leading to loss of vision. The advent of 'molecular imaging' has supported new insights into the utility of FAF as a measure of abnormal processes neither visible nor detectable using previous methods. Of particular significance has been the UCL team's demonstration that photoreceptors can retain their function in the early stages of diseases diagnosed by an abnormal increase of FAF, providing a window of opportunity for novel interventions before the patient experiences loss of vision.

By providing earlier indications of abnormality in cellular function, FAF imaging also provides novel measures of clinical endpoints which are closely linked to visual function and reflect fundamentally important aspects of metabolic function. FAF imaging is now widely used in the assessment of retinal disease. In 2007 it was recognised as a standard technique by the Department of Health and is now available nationwide as part of NHS services. At Moorfields Eye Hospital alone, between 300 and 500 patients per week are imaged using FAF (c.20,000 per year). The impact of this technique on clinical practice has, moreover, spread well beyond the UK, as demonstrated by a 2010 review article in Eye Net magazine (produced by the American Academy of Ophthalmology) which described how "Fundus autofluorescence (FAF) has recently pole-vaulted from a research tool to a real clinical application".

The application of FAF imaging in the clinic has considerable benefits for patients, supporting earlier identification of retinal diseases that would not otherwise be evident and, thereby, facilitating earlier treatment and better monitoring of the efficacy of this treatment. New forms of interventions such as gene and stem cell therapy, for example, increasingly rely on FAF and related novel forms of imaging to determine the potentially beneficial effects of treatment.

Since the UCL team first demonstrated FAF in the living eye, numerous other research centres throughout the world have taken up the technique and many thousands of instruments have been deployed clinically around the world. Several major companies, including Canon, Heidelberg Engineering and Optos, now manufacture these devices, large numbers of which are sold every year. Globally, it has been estimated that c.10,000 of these instruments have been sold, with considerable economic impacts. Instruments typically cost around $200,000, implying spending of c.$2bn for the instruments alone in the period to 2013. There has, in addition, been worldwide investment in clinical staff, infrastructure and medical resources to provide FAF imaging for patients.

Funders included the MRC and the US Foundation Fighting Blindness.