A 'friendly alien' regenerates a city 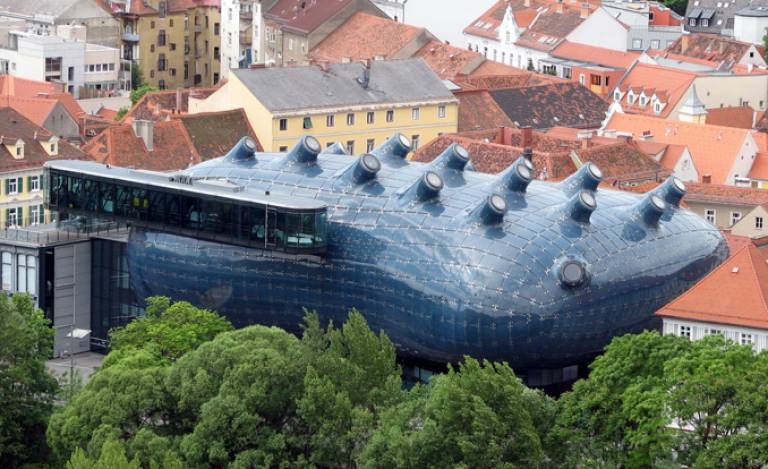 The Kunsthaus Graz, a major Austrian museum was designed by UCL researchers, opened in 2003, and has since been recognised as one of Europe's iconic modern art museums. It is now a symbol of Graz, and has helped regenerate the city's cultural esteem and the neighbourhood's environment and economy.

When Graz, Austria's second city, was designated the European Capital of Culture for 2003, it was recognised that the major challenge the city faced was that of extreme lack of social integration: the east bank of the river Mur was dominated by the universities, banks and the well-to-do, while the opposite bank was inhabited by the poor, the immigrants and the red light district.

The Kunsthaus Graz, designed by Professor Sir Peter Cook and Professor Colin Fournier (UCL Bartlett School of Architecture), was a conscious effort to bridge this gap. Established on the depressed west bank of the Mur, the Kunsthaus was intended as a space to exhibit modern art which would also lead the regeneration of its surrounding area.

Professor Cook was one of the founding members of the avant-garde architectural group Archigram in the 1960s. The Kunsthaus, which opened in 2003, was a seminal contribution to the world's built heritage, and is based on those radical ideas, especially in terms of its 'biomorphic' building style, and the use of interactive building technology which brings contemporary art into the surrounding streets.

Dubbed the 'friendly alien' by its creators, the Kunsthaus's biomorphic design immediately raised the cultural value of architecture in Graz and was central to its selection in 2011 as a UNESCO City of Design. Thanks to its innovative and recognisable design, since 2008 the museum has been used, almost exclusively, as the iconic image of Graz in tourist publications, the media and the broadsheet press, and even on a postage stamp. According to the tourist board, the city's museum visitor numbers have increased dramatically over the years, reaching 70-80,000 per annum by 2008, and the Kunsthaus receives a far higher proportion of the city's cultural tourists (over 87%) than do comparable 'cultural' cities such as Barcelona.

The building's performative façade has led to its integration into its lived environment and was instrumental in the economic and social regeneration of this previously rundown district. Between 2008 and 2013 alone, several new businesses, including cafes and restaurants, galleries and fashion or retail outlets opened in the surrounding streets. In 2008 the House of Architecture, a major Graz cultural institution, relocated next door into the renovated Palais Thienfeld.

It is not a coincidence that more and more creative businesses have settled in the area around the Kunsthaus Graz ... having profited from the revival of this area that had until just recently been considered by the general public as rather underprivileged. - Graz's successful application to become an UNESCO 'City of Design'