The Find&Treat Project: improving control of tuberculosis in hard-to-reach groups 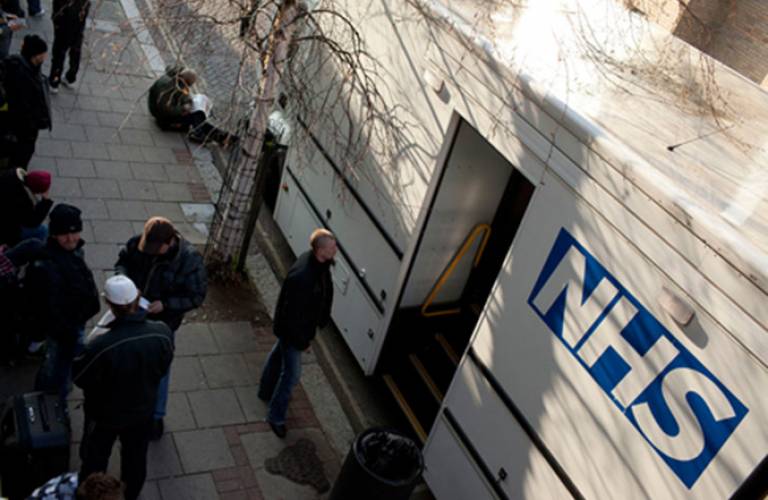 Research into tuberculosis (TB) in hard-to-reach groups (particularly homeless people, problem drug users and prisoners) has led to the introduction of mobile X-ray screening in London, and the development of a pan-London street outreach team. A static digital teleradiology TB screening network has been established in key prisons and the research has influenced national policy and public health guidelines.

London is now the 'TB capital' of Europe and has more cases annually than the Netherlands, Belgium, Greece and Norway combined. TB is curable in virtually all cases and can be effectively controlled as long as cases are found early, and patients complete treatment.

In 2003-14, researchers led by Dr Andrew Hayward (UCL Infection & Population Health) and Alistair Story at the Health Protection Agency began to look at the social as well as clinical factors that affect patient outcomes. They found that three groups in particular - the homeless, drug users and prisoners - have a much higher prevalence of tuberculosis. Unfortunately, this is frequently not diagnosed early, and these patients are less likely to complete a course of treatment.

The team then began to look for ways to address these issues. Using a mobile X-ray screening van, they began a pilot project to screen for TB in homeless hostels and prisons. Over the next two years they screened thousands of patients, and identified many cases which would otherwise have been missed.

The project has now become a permanent service. Find&Treat is a specialist outreach team that works alongside over 200 NHS and third-sector front-line services to tackle TB among homeless people, drug or alcohol users, vulnerable migrants and people who have been in prison. The multidisciplinary team takes TB control into the community, finds cases of active TB early and supports patients to take a full course of treatment and get cured. The service spans the TB pathway from detection, to diagnosis and onward care. The screening service covers every London Borough and supports Public Health England to manage outbreaks of TB nationally.

Find&Treat is a unique health and social care service built around the needs of homeless and vulnerable people with TB… Our research revealed the magnitude of TB and blood borne virus co-infection among homeless people. - Dr Alistair Story, Find&Treat Clinical Lead