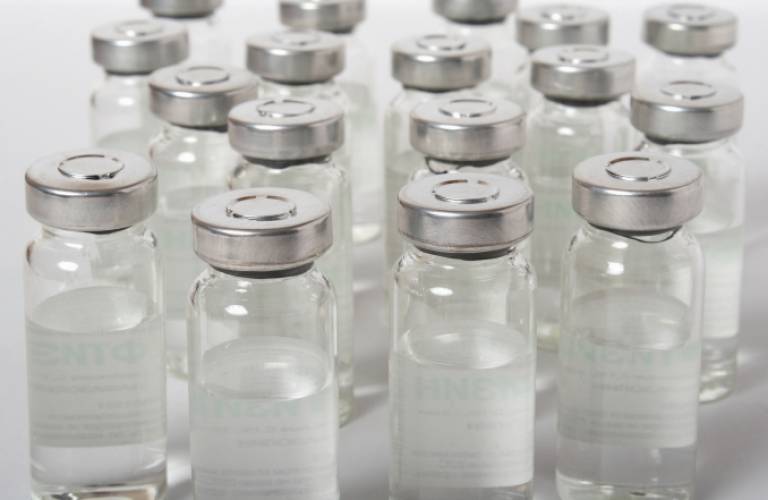 The UCL Institute of Child Health Vaccine Evaluation Laboratory is one of only two World Health Organization Reference Laboratories for Pneumococcal Serology. Its efforts to evaluate pneumococcal conjugate vaccines have led to their introduction into the infant immunisation schedule in the UK.

Invasive pneumococcal disease is a significant cause of sickness and death in children. Every year, half a million children under five die from the condition, making it the leading vaccine-preventable cause of death among young children.

Over the last 20 years, a programme of work undertaken jointly between the UCL Institute of Child Health Vaccine Evaluation Laboratory, headed by Professor David Goldblatt, and Public Health England has led directly to the introduction of pneumococcal conjugate vaccines (PCV) into the UK infant immunisation schedule. These vaccines have reduced the burden of invasive disease in the UK, saving many lives and reducing morbidity from these devastating infections.

The first pneumococcal conjugate vaccine containing seven of the most prevalent serotypes (PCV7) was licensed in 2000 as a four-dose schedule. Adding a new vaccine to the relatively crowded UK infant immunisation schedule in the early 2000s presented significant difficulties, as infants were already receiving two injections at each immunisation visit (at 2, 3 and 4 months of age).

The researchers were the first in the world to formally assess the utility of a three-dose, rather than the licensed four-dose, schedule and to predict the efficacy of the reduced schedule based on the data generated in this study. Their demonstration that three doses were immunologically broadly equivalent to four gave the Department of Health the evidence base to introduce PCV into the routine infant immunisation programme vaccine with doses at 2, 4 and 12 months ('2+1' schedule). The vaccine was introduced into the routine infant immunisation schedule with a catch-up campaign for older children in 2006.

The introduction of PCV in the UK has had a clear impact on pneumococcal disease. Prior to its introduction, deaths from IPD in children under five had peaked at 797 cases/year. In 2011/2012 (the last year for which there are complete data) this had reduced by 50% to 340 deaths. Notably, cases of IPD due to the seven serotypes included in the vaccine have fallen dramatically.

The '2+1' schedule has been highly efficacious and is also more cost effective, as it uses fewer doses. For these reasons, many countries worldwide have implemented it. In 2013, the World Health Organization (WHO) reports that 23 countries in Europe and the Americas are using PCV according to the schedule developed.

The work has also contributed to global efforts to reduce mortality from pneumococcal disease in developing countries. Professor Goldblatt has contributed to efforts by WHO and GAVI, the Vaccine Alliance, to make effective and affordable pneumococcal vaccines available for children in developing countries. He chaired the committee that defined the minimum product specification (TPP) for vaccine procured via GAVI's Advanced Market Commitment (AMC). As a result of the AMC, UNICEF entered into agreements with GSK and Pfizer to supply 30 million doses annually for 10 years. Since 2010, over 25 countries have begun to roll out pneumococcal vaccines under this programme; by 2013, it was estimated that GAVI and its partners have immunised more than 10 million children. GAVI aims to increase this to 45 countries by 2015, projecting that this will prevent more than half a million deaths in this period.