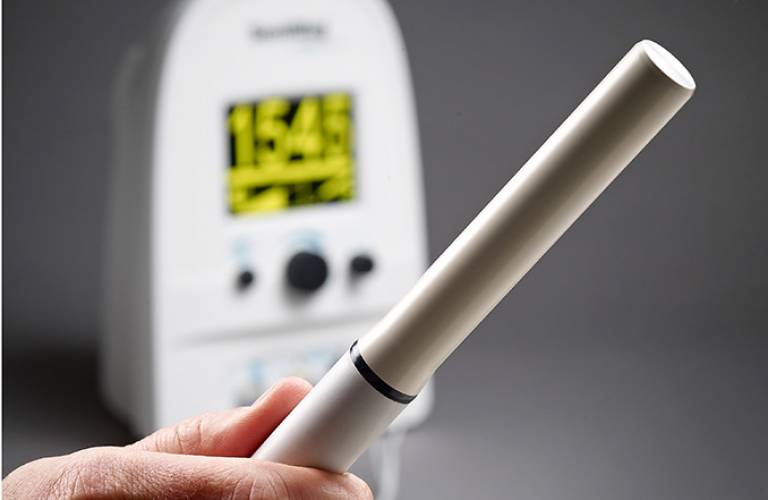 A new method of detecting how far a patient's cancer has spread has been developed at UCL. The SentiMag device uses magnetic nanoparticles for the procedure, rather than the standard radioactive isotopes. This makes it cheaper and easier for hospitals to carry out sentinel lymph node biopsies.

Globally, 1.38 million new cases of breast cancer are diagnosed each year, with the number increasing year on year. A minimally invasive sentinel lymph node biopsy (SNLB) is the recommended standard of care for patients with breast cancer. Doctors identify the sentinel lymph node, the first lymph node that cancer cells reach, by injecting a radioactive tracer fluid close to the tumour to provide a trackable signal; the node is then removed to determine whether or how far the cancer has spread. In Britain, around 80% of all operations for breast cancer include SLNB, but the figures drops dramatically in other parts of the world where access to safe radioactive medicine is less common.

A team of UCL researchers developed both the SentiMag detector and a magnetic tracer, Sienna+, to replace the radioactive isotopes. The tracer contains coated iron oxide particles, each with a diameter of just 60 nanometres, as lymph nodes easily absorb particles of this size. Production is carried out by Endomagnetics, a university spin-out company that was formed in 2007. Over the next few years, the team worked on refining a prototype of the SentiMag, which received CE marking allowing it to be used throughout Europe in 2010.

Since then, a total of 10 clinical studies and trials with more than 1,500 patients across 12 EU countries have been completed, all of them reinforcing the effectiveness of the method. The SentiMag device and Sienna+ tracer is now being sold and used in 16 EU countries, and in Australia and New Zealand, with more countries in the pipeline. Endomagnetics is also undertaking a 'premarket approval' clinical trial across six sites in the United States, and is working on expanding into other types of cancer, including melanoma and prostate cancer.