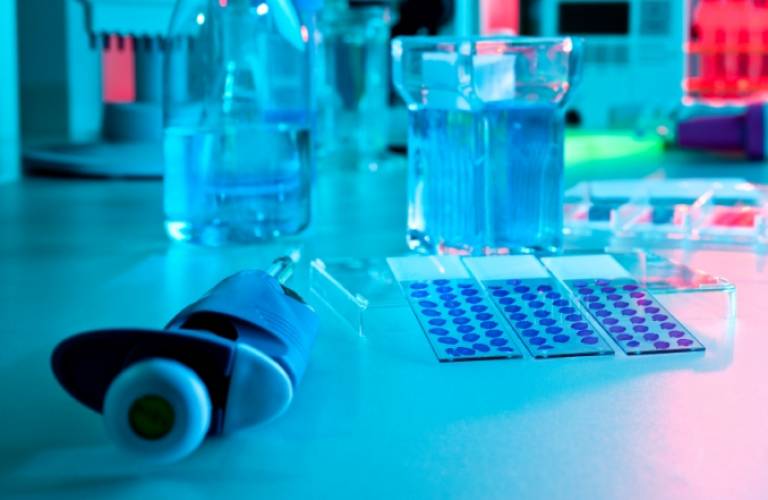 Research at the UCL Cancer Institute has developed novel cancer therapeutics, leading to the spin-out of biotechnology company Spirogen in 2001. Spirogen currently focuses on antibody drug conjugate technology, which has the potential to directly target cancer cells while leaving healthy cells intact. Spirogen was sold to AstraZeneca's MedImmune unit in 2013 in a deal worth up to $440 million.

Research at the UCL Cancer Institute into drug-DNA interactions, in collaboration with the School of Pharmacy, led to the rational design, synthesis and development of novel pyrrolobenzodiazepine (PBD) dimers as potent anticancer agents which have been shown to have broad spectrum anti-tumour activity in vivo. These drugs exert their activity by binding in the minor groove of DNA and linking the two DNA strands together in a way that cells find difficult to recognise and repair. One PBD dimer drug has been evaluated in four Phase I clinical trials both in the UK through Cancer Research UK and in the USA through the National Cancer Institute, and has progressed to Phase II clinical trials in platinum refractory ovarian cancer and haematological malignancies.

Biotechnology company Spirogen Ltd was spun out in 2001 to commercialise the research and has attracted significant investment from within the UK and overseas. Further generations of PBD dimers were developed with increasing potency. The ability to generate molecules that display such exquisite potency suggested a potential role in strategies aimed at targeting and releasing highly cytotoxic agents directly at a tumour site. An example is as the 'warhead' component of an antibody drug conjugate (ADC), an area that is fast emerging as one of the principal approaches in the field of monoclonal antibody cancer therapeutics.

The fully synthetic PBD dimers are ideally suited for the role of warhead in an antibody drug conjugate approach. They combine potency with a demonstrated therapeutic index, are not cross-resistant with widely used chemotherapy agents, and their unique mode of action sets them apart from earlier generations of warhead. We eagerly await clinical proof of concept of our cutting-edge technology. - Professor John Hartley, UCL and founder scientist of Spirogen

The company has a broad intellectual property base with more than 40 published patents and patent filings covering the use of PBDs as stand-alone anticancer drugs and as targeted agents. The company currently has 25 employees, and is based at the Queen Mary BioEnterprise Innovation Centre, London. Collaborative research and licence agreements to secure further inward investment have been established with multiple partners, including Seattle Genetics and Genentech, a member of the Roche Group. Three PBD dimer-containing antibody drug conjugates, targeting both haematological malignancies and solid tumours, are in Phase I clinical trials with partner companies and more than 10 are in late pre-clinical development.

In late 2013, Astra-Zeneca's MedImmune unit acquired Spirogen for an initial $200 million, with a further $240 million should Spirogen meet development milestones. In addition, a Spirogen spin-out, ADC Therapeutics, has attracted over $100m capital for the development of PBD-containing antibody drug conjugates.