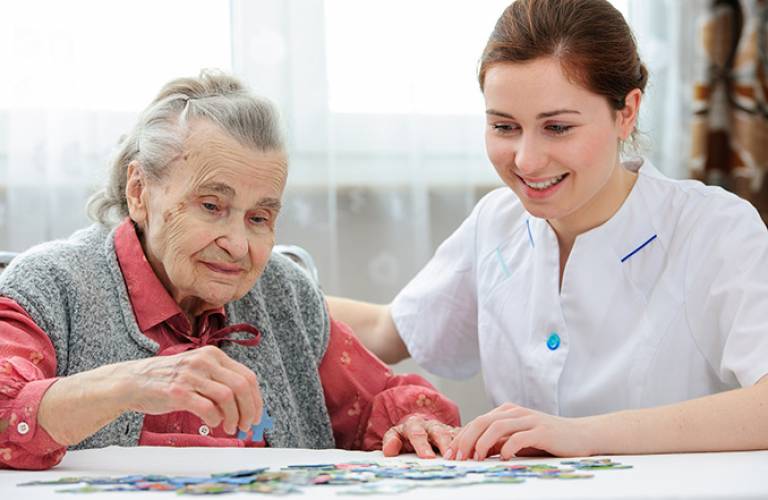 Dementia is a common condition that affects about 800,000 people in the UK. UCL research over the last 15 years has led to the development of an evidence-based group therapy for people with dementia, which has changed dementia care within the UK and worldwide.

Beginning in 1998, the group led by Professor Martin Orrell (UCL Psychiatry) and Dr Aimee Spector (UCL Psychology & Language Sciences) conducted a multi-centre randomised controlled trial, in collaboration with Professor Bob Woods at the University of Bangor. This tested the use of Cognitive Stimulation Therapy (CST), which aims to improve cognitive skills and quality of life for people with dementia through activities such as categorisation, word association and discussion of current affairs.

The therapy resulted in a remarkable improvement in cognition and quality of life, similar to that obtained using anti-dementia drugs. Subsequent analysis of the trial data showed that CST benefits memory, language and executive functioning in dementia, with the most marked impact on language. Qualitative interviews with service-users and staff showed that changes generalised into everyday life such as improvements in mood and concentration. Further research showed that cognitive function can continue to improve for a six-month period using weekly CST sessions following from the initial programme.

"CST is the gold standard, because the evidence is that it does produce an improvement in people's memory scores, and certainly in their quality of life." - consultant psychiatrist Daniel Harwood, Isle of Wight NHS

The team has since developed four manuals, and a training programme, which have allowed the programme to be disseminated around the world.

In 2006, referencing the research, the National Institute for Health & Care Excellence (NICE) recommended that "people with mild/moderate dementia of all types should participate in group Cognitive Stimulation which should be commissioned and provided by a range of health and social care workers with training and supervision. This should be delivered irrespective of any anti-dementia drug received by the person with dementia."

Many people with dementia in the UK and beyond are now benefiting from CST. It is recommended by a large number of NHS trusts, and has been implemented in other settings such as care homes, and even by individuals.

The impact on the lives of people who undertake such programmes is considerable. The UCL team interviewed patients and carers who had taken part in the programme. "I noticed people becoming more fluent and you could see people trying to express themselves more," said one patient. The husband of another participant reported that "there is no argument that my wife's brighter," and another said "she's started remembering things since coming to the group".

National and international policymakers are now starting to pay attention to the huge potential for this therapy. In 2011, the NHS Institute for Innovations concluded that CST can save the NHS £54.9 million a year through reduced use of antipsychotic medication. In 2012, the Memory Services National Accreditation Programme (run by the Royal College of Psychiatrists) included CST as one of their key standards for accreditation. They now report that, as a result, CST is used in 66% of memory clinics. The World Alzheimer's Report has recommended that CST should routinely be given to people with early stage dementia. It advocates using CST to provide an effective low-cost intervention to help improve cognition for people with dementia in developing countries.

The CST manual has been translated into several languages including Japanese, Spanish, Italian, German, Portuguese, Dutch and Swahili. Since 2008 CST has been used in numerous countries including Australia, Nepal, Tanzania, Brazil, China and Nigeria. As a result of the growing international CST research and practice, an international CST centre has recently been established at UCL.