Building climate resilience in the cities of the Global South 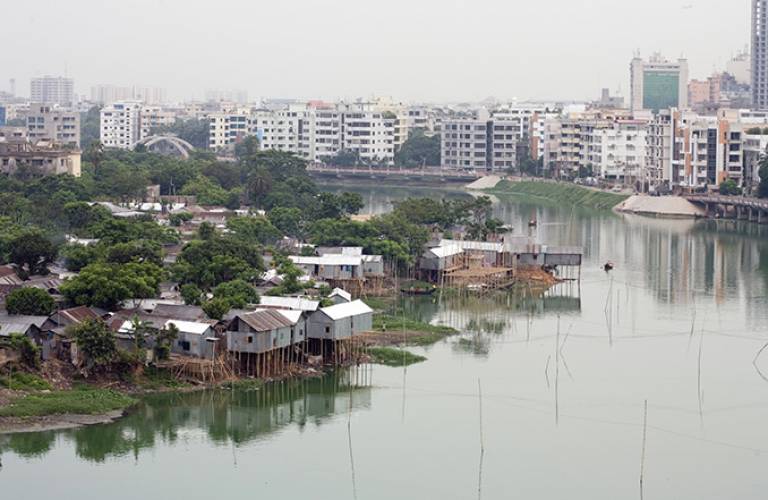 Research on how the views and experiences of residents of the great cities of the Global South can be integrated into efforts to plan for the effects of climate change has led to new forums enabling the most marginalised citizens to contribute to the global effort to build more resilient cities.

People living in the cities of the Global South are particularly vulnerable to effects of climate change. For example, Dhaka was affected by nine major floods in the past 55 years, which had disproportionate impact on its 3.4 million poorest inhabitants with limited access to services. As climate events increase in both frequency and intensity, it is essential to develop ways to mitigate their effects on these extremely vulnerable populations.

Research at the UCL Development Planning Unit (DPU) is addressing this need. Dr Cassidy Johnson and Professor Adriana Allen examined how ordinary citizens in Dhaka adapt to changing environments, and drew lessons on how policy can support these measures. Another project entitled Public Private People Partnership for Climate Compatible Development (4PCCD) in Maputo, Mozambique, led by Dr Vanesa Castán Broto, created a partnership between citizens and policymakers as an experiment in ensuring that citizens have a meaningful voice in planning for climate change. After receiving the Award of Lighthouse Activity from the UNFCCC, this project has been presented in the international climate change negotiations as an example of participatory urban planning for climate change.

These projects have had significant impact on how policymakers and aid organisations plan to create more resilient cities. In Maputo, where half of the one million residents are below the poverty line, the research project helped to create a local planning committee on climate change (CPC), which included young and elderly people, housewives, salaried workers and traders. The CPC pointed out that poor waste disposal contributed to flooding in Maputo, as drainage channels were frequently blocked, and worked with the authorities to develop an environmental education programme and mobilise city dwellers to clean and maintain drainage channels. Meanwhile, in Dhaka the research recommendations supported better planning on land use, infrastructure and business design with a focus on climate change mitigation.

It created a classification of five urban 'trajectories' to help policymakers design suitable interventions for those environments. The project's recommendations spurred major international donors to re-assess their aid priorities to support effective local responses for resilient urban development. The UK's Department for International Development adopted the project recommendations as a diagnostic tool to guide its climate-change portfolio and funding allocations in Asia, Latin America and Africa. In Bangalore and Madurai, India, the Future Proofing Cities framework was used to create a participatory planning process to develop ways of diagnosing and acting on climate risks in urban areas. The diagnostic stage was completed in 2013, and actions plans are now being developed using this process.

A similar process has been undertaken through the project entitled Learning Lima, led by Professor Allen and Rita Lambert, in collaboration with the UCL Centre for Advanced Spatial Analysis, where innovative mapping tools have been deployed, in collaboration with community members, to identify risk trajectories, what-if scenarios and future pathways towards climate resilience. Learning Lima will be exhibited at COP20 in December 2014.

For climate-compatible development to have deep roots and the prospect of sustainability, such plans must be owned by communities and speak to their many development challenges, of which climate change is but one, critical facet. - Sam Bickersteth, CDKN Chief Executive