A better fit for all 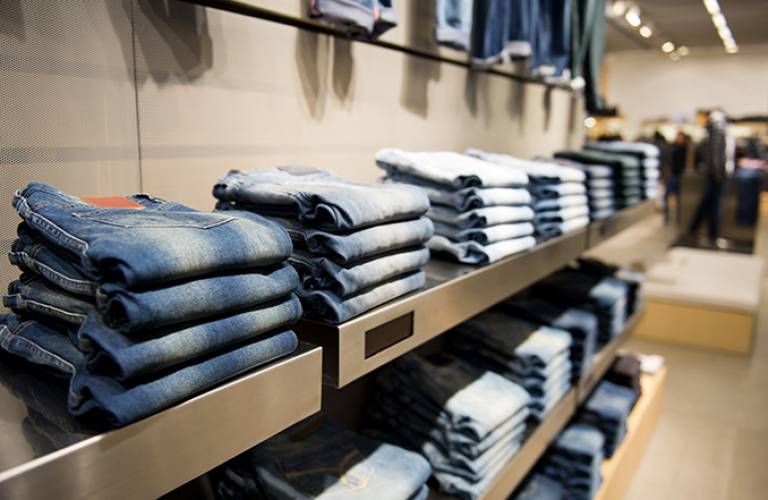 UCL's pioneering use of 3D body surface scanning and national anthropometric surveys has helped clothing manufacturers to improve fit and reduce the time taken to produce new lines. A spinout company sells brand-specific size charts and custom fit mannequins to retailers, and the survey data is used in healthcare research.

In 2001, more than 11,000 people across the UK were scanned using 3D body scanning technology developed at UCL. The survey, SizeUK, was the first national sizing survey since the 1950s. It found that the average female waist size had increased by 16.5cm since the original survey and that over 60% of UK shoppers had difficulty finding clothes that fit. Sizing surveys have since been carried out around the world using the same technology, including in the USA, Germany, Thailand and Italy.

UCL and its partners used the SizeUK data to develop brand-specific size charts for more than 25 UK retailers, based on the brand's own demographic customer profile. The success of these charts led UCL to establish a spinout company, Sizemic, in 2008, which now sells clothing size charts and fit mannequins based on the SizeUK data, helping manufacturers and retailers improve the fit of their clothing. Manufacturers use fit mannequins for product development and quality assurance. Sizemic offers both customised mannequins and a range of specially developed generic mannequins, available in a variety of sizes and shapes representing different age groups for both genders. They enable retailers to establish the optimum body shape for their target market and standardise this across their supply chain, ensuring that all of a company's suppliers are developing and fitting product on the same body size and shape.

Use of the mannequins speeds up the product development time, as samples no longer need to be shipped back and forth between suppliers in Asia and retailers in Europe and America. Without the fit mannequins, it would typically take four to five iterations of a sample before a retailer could finally approve it. This has now been reduced to one or two iterations, resulting in at least a 50% reduction in sample making, shipping and fit model costs. It also reduces the likelihood of customers returning purchases because of fit and sizing issues.

Sizemic has also created a range of SizeGERMANY fit mannequins, while the survey data have been used to update Germany size charts and produce virtual avatars.

In Thailand, the data was used to create the first-ever standard Thai body size chart, which is used by manufacturers to design and produce clothes that better fit the Thai population. Clothing manufacturers who have adopted the SizeTHAILAND sizing system report a 35% reduction in overall clothing alterations.

Another UCL spinout company, Bodymetrics, produces body scanners for use in clothing retail. At Selfridges in London and Bloomingdales stores in California, Bodymetrics pods scan customers to provide made-to-measure jeans and identify which brand will most suit individual customers. In the UK, New Look also uses Bodymetrics scanning technology in-house to ensure uniformity of size for garments manufactured in factories across the world.

A recent development has been a 3D healthcare system for GP practices that analyses and comments upon a patient's 3D anthropometrics, comparing the patient's scan to the SizeUK data. It helps doctors identify any deviation of the patient from national norms - for example, the shape of the stomach is an indicator of the propensity for the onset of type II diabetes. A company, ShapeDynamics, was established in 2010 to support the software. Since 2011, the system has been undergoing trials at a large private GP practice in the City of London.

The data has other applications in healthcare. For instance, researchers at UCL's Institute of Child Health have analysed the data from the UK, USA and Thailand for obesity, demonstrating the limitations of BMI and the 'velocity' of obesity in children.