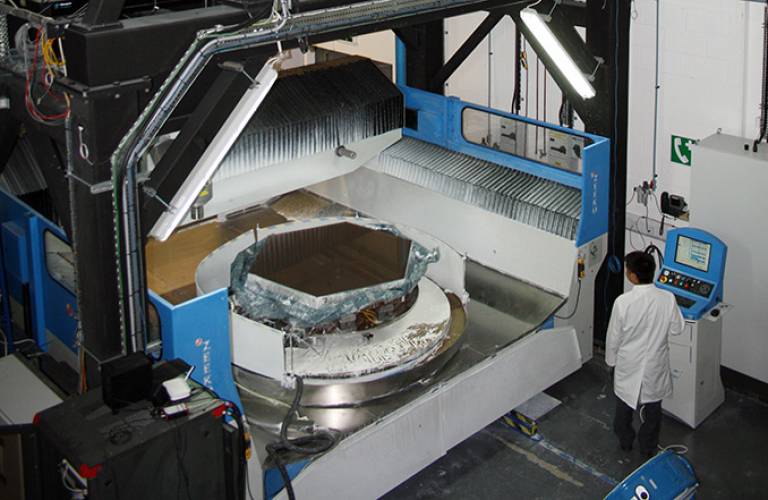 Award-winning technology invented at UCL is helping companies manufacture ultra-precision optical surfaces for use in a range of industries including astronomy, healthcare and defence. Customers are able to produce high-quality surfaces from poorer materials and in less time, and create larger and more complex surfaces than had previously been possible.

The technology is sold by UCL spinout Zeeko Ltd, which has developed a range of innovative computer numerically controlled (CNC) polishing machines and metrology. The polishing technology invented by Professor David Walker (UCL Physics & Astronomy) uses spinning tools covered with a polishing pad. A computer-controlled robotic system to position and orientate the tool is programmed to accurately adjust the position, speed and pressure of the polishing head. These intelligent robotic polishers can produce ultra-smooth and nanometre accurate surfaces on almost any material, from traditional optic materials like glass to stainless steel and tungsten carbide.

Zeeko has been expanding rapidly - its turnover increased by 60% between 2008 and 2012 and it supplied machines to customers in 18 countries globally. These customers cover a wide range of markets, including astronomy, defence, automotive, consumer, aerospace, remote sensing and semiconductor-photolithography.

For example, all the optics for the NASA Lunar Reconnaissance Orbiter mission in 2009 were made on a Zeeko machine at LightWorks Optical Systems in California. Media Lario Technologies, which manufactures mandrels for large X-ray imaging mirror shells, uses a Zeeko CNC machine to produce high-accuracy mandrels used in X-ray astronomy.

Building on his earlier research, Professor Walker developed a new family of more aggressive 'grolishing' processes to smooth defects in pre-ground surfaces, and so accelerate subsequent polishing. Grolishing has a ten times higher process-rate than polishing and was incorporated into the entire family of Zeeko CNC machines in 2008, increasing their dynamic range. As a result, a single machine can process parts ground on classical grinding machines, removing the need for a highly polished surface in near-final form or the use of additional machinery.

It has given me particular pleasure to see how my team's results have led to successful manufacture of prototype mirror-segments for the most challenging optics project in the world - the E-ELT. - Professor David Walker

UCL research into on-machine metrology allowed Zeeko to branch out into this area, in collaboration with 4D Technology Inc. This included the introduction in 2010 of a new product, the Optics Fabrication Centre (OFC) - based on the 2006 manufacturing cell prototype developed by Walker - which integrates a CNC polishing machine with an optical test tower. The OFC won an Innovation Award at the Queen's Awards for Enterprise in 2011.

In 2013, Zeeko added to its suite of metrology products by releasing two versions of Swing Arm Profilometer technology, which enables customers to measure the surface-form of components on the polishing machine, at early stages when they are still rough or not fully polished.