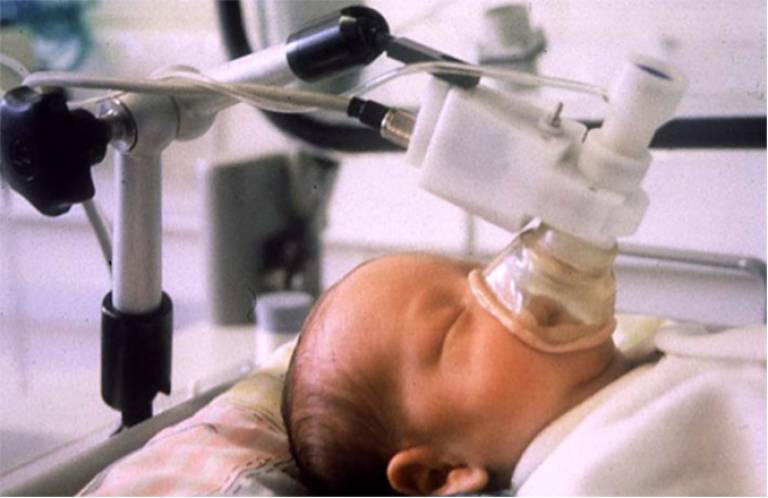 Commercially available equipment for assessing lung function in infants and preschool children has been developed based on work by UCL researchers, whose multi-ethnic, all-age lung growth charts have been endorsed internationally and are now in widespread use.

Respiratory diseases cause around half of all acute illness in children. Prior to the 1990s, assessment of infant lung function was limited to a few specialised physiology laboratories. In order to facilitate more widespread and standardised applications, Professor Janet Stocks (UCL Institute of Child Health) co-founded the European Respiratory Society/American Thoracic Society Task Force on infant lung function testing.

Over the next 20 years, the researchers first established standardised methods for assessing lung function in sleeping infants, then did the same for the more challenging task of assessing awake pre-school children. Such young children had previously been considered 'untestable', but the team achieved a high success rate, meaning that for the first time, continuous assessments of lung function became feasible from birth to old age.

These developments have revolutionised the early detection of lung disease, allowing therapeutic interventions to be given earlier, and improving long-term outcomes.

The use of lung function tests to guide the clinical management of lung disease requires appropriate reference equations with which to detect abnormalities. These were, however, poorly developed for infants and preschool children and for those not of white European ancestry. From 1995 onwards, the team led numerous initiatives to rectify this situation, in collaboration with Professor Philip Quanjer, in the Netherlands, culminating in the recent publication of 'all-age' multi-ethnic equations for spirometry.

The researchers' recommendations and reference equations have now been incorporated into commercially available equipment that is sold around the world. This has had a substantial clinical impact on management of early lung disease in hospitals around the world. In 2011, Professor Stocks was awarded a Lifetime Achievement Award by the European Respiratory Society in recognition that her work has helped give paediatric medicine the tools to better understand and treat the respiratory illnesses of childhood. She has also recently been awarded the British Paediatric Respiratory Society 2013 lifetime achievement award in recognition of her commitment in advancing the care of children with respiratory disease in the UK.

Professor Stock's detailed review of outcome measures for assessing lung function decline in the first two years of life in newborn screened cystic fibrosis infants… led to our clinical decision to limit CT scanning to just those children who are showing unexplained clinical decline and remove it from our routine surveillance programme - with cost benefits to the NHS and reduction in harm to patients. - Dr Colin Wallis Lead paediatric clinical consultant at GOSH