Anthropological research influencing clinical practice in the US, Europe, Bhutan and Myanmar 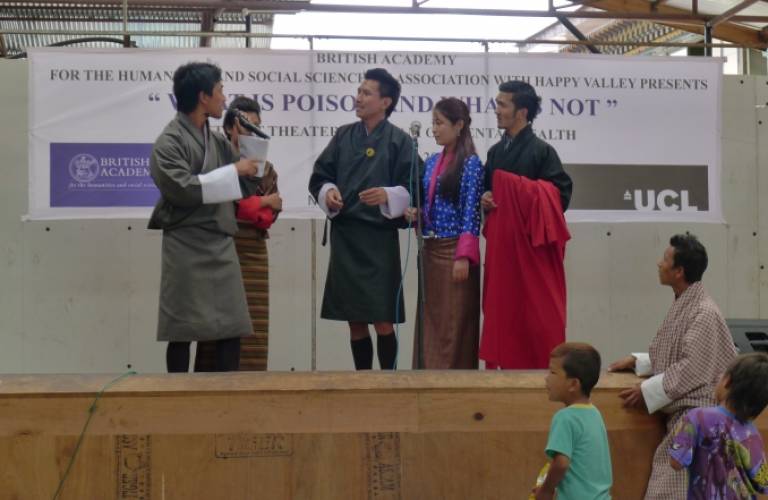 UCL research informed the inclusion of culture-bound syndromes in the manuals of mental disorders which guide diagnosis and practice in the United States. In Bhutan, research guided the country's nascent psychiatric health services, and in Myanmar informed a vulnerability assessment tool to identify where assistance should be directed after Cyclone Nargis.

UCL Anthropology researchers pioneered the study of clinical ethnography as a method which involves an immersive ethnographic study of illness and clinical practice, with the additional intent, and result, of improving clinical outcomes. The foundations of this study were established by Professor Roland Littlewood through work on the relationship between colonialism, racism and psychiatric theory, including projects on the cultural shaping of mental illness in the Caribbean and elsewhere.

This led to the inclusion of an appendix by Professor Littlewood on culture-bound psychiatric syndromes in the fourth edition (1994) of the Diagnostic and Statistical Manual of Mental Disorders (DSM-IV), the hegemonic manual used daily by practitioners. DSM diagnoses are used by American clinicians to request reimbursement from insurance companies, and by national agencies to monitor morbidity and mortality. Thus, understanding culture-bound syndromes and relating them to the appropriate DSM diagnoses was essential to ensure patients were diagnosed and treated correctly, their physicians were paid, and these cases were incorporated into national statistics. Professor Littlewood's appendix was carried forward into the revised fourth edition (DSM-IV-TR) in 2000, and again in the updated DSM-5.

Dr Joseph Calabrese studies the connection between culture and mental health from the dual perspectives of ethnographer and practicing clinician. At Harvard University's teaching hospitals, he studied the barriers raised by the mismatch between patients' need for a traditional doctor/patient relationship and the reality of an impersonal medical system. His research amongst Native Americans documented healing experiences and the effectiveness of a healing ritual using peyote in treating alcoholism. And in Bhutan, he embarked on a project which investigates local understandings of mental illness through participant observation and volunteer clinical practice.

Dr Calabrese's work has been used in the training of approximately 100 clinicians at the University Hospital Basel, and his research on Native American healing is used to train clinicians at the Harvard Medical School and in training modules of the US Department of Health and Human Services. His work, and Professor Littlewood's, is widely cited in medical journals which otherwise rarely draw upon anthropological research, and are widely read by clinicians.

" UCL Medical Anthropology brings together clinicians and anthropologists to create research with relevance for clinical practice and policy, while also advancing anthropological understanding of health and illness in diverse cultural contexts. - Joseph Calabrese

Robust psychiatric care is an essential component of delivering Bhutan's commitment to Gross National Happiness. Yet the mental health system is dramatically under-resourced: in 2012 there were only two psychiatrists serving the entire population of 672,000. Many resist psychiatric care both due to stigma and due to traditional understandings of illness in terms of spirit possession, soul loss, or angry local deities, necessitating a culturally competent approach. Dr Calabrese's action research has been instrumental in building a foundation for anthropologically informed psychiatric services in Bhutan. In 2011-2013 he trained psychiatric staff and in 2013 brought the Chief Psychiatrist to UCL to meet British medical anthropologists and psychiatrists. This visit led to an agreement with the newly established University of Medical Sciences of Bhutan to develop curricula in medical anthropology for medical students and allied health professionals. Dr Calabrese also draws on his research to educate Bhutanese professionals and the public through radio shows, public lectures and newspaper interviews.

When Cyclone Nargis hit the impoverished coastal areas of Myanmar in 2008, it killed 150,000 and left up to one million homeless. Professor David Napier's research on the health effects of climate change, as well as prior field research in Myanmar, informed the development of the first fully integrated qualitative-quantitative method for assessing vulnerability in a disaster rapid-assessment tool. He trained 18 Burmese to carry out work with the consent of the military dictatorship and, as a result, informed the immediate development of responsive identifications of where humanitarian assistance should be directed.