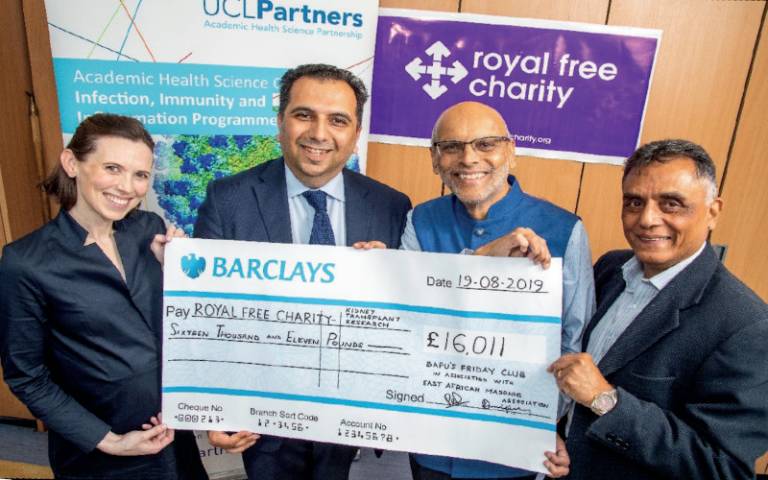 A grateful patient has raised more than £16,000 for kidney transplant research led by Reza Motallebzadeh at the IIT.

Pradip Patel, known as Bapu, received a donated kidney in December 2017 after 19 months of dialysis following acute kidney failure. “The generosity, selflessness and brave decision of the deceased donor to donate his organs has given me the opportunity to continue living life, a life I now truly cherish,” he said.

Mr Motallebzadeh was one of his surgeons and when Mr Patel heard about his work to reduce the rejection of transplanted organs, he decided it was time to “give back”.

The research work focuses on the role of the body’s microbiota - made up of micro-organisms including bacteria, viruses and fungi - in organ rejection, and aims to uncover the mechanisms underlying both acute and long-term rejection.

“I’m particularly interested in the role of the host microbiome, which we know communicates with the immune system, “ said Mr Motallebzadeh. “We think that disruption to this “crosstalk” can affect the repertoire of immune cells that can determine the outcome for patients after transplantation, either through rejection or infection.”

His team’s work involves monitoring patients’ urinary and gut microbiome after kidney transplantation to see how it has been affected by the surgery and attendant treatments, including antibiotics and immunosuppressive drugs. He hopes this work will lead to the development of novel therapies to promote longer-term kidney transplant function.

Mr Patel said being a recipient of a donated kidney had opened his eyes to the benefits of joining the organ donor register and urged others to do the same.