Chloe Ireton is a Lecturer in the History of Iberia and the Iberian World 1500-1800, and works on the histories of race, slavery, freedom, and empire in the early Southern Atlantic world. Chloe joined UCL in 2018, after completing a PhD at The University of Texas at Austin. Over the last few years, Chloe has also held institutional affiliations with the Departmento de Historia at Universidad de los Andes in Bogotá, the Instituto de Investigaciones Históricas at the Universidad Nacional Autónoma de México in Mexico City, and the Área de Historia Moderna at the Universidad de Pablo Olavide in Sevilla, and she has also been a fellow in residence at the John Carter Brown Library in Providence, Rhode Island, and the Huntington Library in San Marino, California.

Chloe is currently at work on Intellectual History from Below: Slavery & Freedom in the Early Iberian Atlantic, a monograph that explores how free and enslaved Black men and women in the early Atlantic world conceptualized two strands of political thought – freedom and slavery. The monograph adopts a social history approach that explores Black voices in, and across, diverse historical archives to think about the possibilities of writing an intellectual history from below through fragmentary evidence and archival silences. Intellectual History from Below maps how enslaved and free Black Africans in the early Atlantic conceptualised and defined meanings of slavery and freedom as Black individuals and communities fought to obtain greater degrees of lived freedoms in colonial society through their work as litigators in court, as petitioners for royal justice, membership in trans-Atlantic communities, laborers, and in their daily lives across the early Atlantic world. The book explores how Black Africans and their descendants spearheaded diverse discursive landscapes about freedom and slavery in the early Hispanic Atlantic, and traces how their discourses and actions reshaped European political thought.

Chloe was granted the Renaissance Society of America William Nelson Prize 2020 for the best article to appear in the Renaissance Quarterly in 2020 for “Black Africans’ Freedom Litigation Suits to Define Just War and Just Slavery in the Early Spanish Empire." The Nelson Prize award commended the article with the following award citation:

“Meticulously researched, documented, and lucidly written, Chloe Ireton’s groundbreaking essay argues that enslaved Black Africans in the Iberian Atlantic participated in the discourses of Just War and Just Slavery. Through a variety of sources, she demonstrates that enslaved and free Africans in the Iberian Atlantic were aware of the intellectual debates that concerned the legitimate and the illegitimate enslavement of Africans in religious and intellectual circles. Some enslaved Black Guineans litigated for their freedom in Spanish royal courts, arguing that, as Christians, they had been unjustly enslaved in Africa. This exploration of enslaved Africans’ impact on the discursive landscapes of the Iberian cities where they resided goes some way to position Black Africans as important actors in the intellectual history of the Atlantic world. Although the article focuses on two case studies, one from sixteenth century Sevilla, and a second from seventeenth century Cartagena, Ireton references many other cases presented in previous published scholarship (of subjects in Latin America, Spain, and in Africa) to strengthen the argument that these two cases epitomize a larger phenomenon of enslaved people’s engagement in the Just War and Just Slavery debates.  The implication of the article is that intellectual histories should expand their purview beyond Western Europe to include the discourses on just or unjust slavery in the Americas and in Africa, at all levels of society. In her convincing and engaging essay, Ireton makes a strong case for the expansion of this inquiry around the globe.”

Chloe regularly engages the public about her research and teaching through public lectures, interviews, and historical consulting. In 2021, Chloe co-organized “Beyond Eurocentrism in Intellectual History, a colloquium,” with Professor Nicola Miller. In 2021, Chloe also worked on an interdisciplinary collaboration with John Beusterein and Sara Pink on antiracist pedagogy, culminating in their co-authorship of ‘Callejeando Sevilla histórica: Una caminata antirracista por la ciudad, [Walking the streets of historic Seville; an anti-racist walk through the city]” co-authored with John Beusterein and Sara Pink, in Hispania 104.1 (2021): pp. 332–42. Chloe also supports various Widening Participation initiatives, most recently co-leading the UCL History Undergraduate Induction Project with Dr. Patrick Lantschner. Chloe is also regularly involved in community education projects, and over the years has developed various in-community writing workshops (in both UK and Colombia) to help foster confidence in writing, literacy, and authorial voice, usually culminating in a collaborative community or individual writing project. Chloe also often mentors young adults from low-income and non-traditional backgrounds in further education, life skills, and employability.

Broadly, Chloe's teaching explores the histories of African, Hispanic, and Lusophone worlds between 1500 and 1800, and how these regions contributed to knowledge formation and histories of ideas in Europe and the Americas. 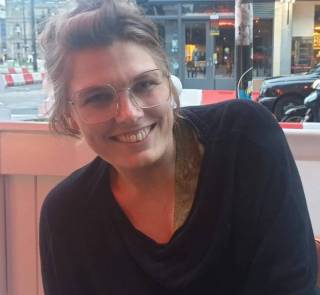