Adela Halo is a modern intellectual historian with a PhD (2020) from Queen Mary, University of London. Since then, Adela has been an Associate Lecturer (Teaching) in History of Political Thought at UCL. Her teaching includes an undergraduate survey course ‘History of Political Thought in the West’, and the postgraduate ‘Crisis and Future in Nineteenth-Century European Thought’. She also teaches a second-year research seminar on the intellectual history of democracy where students are invited to examine questions of equality, citizenship, community, sovereignty, liberty, and representation from a historical perspective. These courses are a reflection of her research interests.

Broadly, Adela is interested in ideas of democracy, equality, liberty, crisis, corruption, and order during the 18th and 19th centuries. A fascination with them started since the mid-nineties, with the transition of post-communist countries, including her own - Albania, from socialism to capitalism. Adela’s nearly completed book project is the culmination of these long-standing interests and focuses on constitutional debates during the French Revolution and the struggle to transform monarchical France into a republic. More specifically, it examines the thought of Germaine de Staël and her ideas on legislative and executive powers, representative government, public opinion, and the link between religion, mores, and political order. By recovering religion as central to Staël's idea of human advancement and political order, the book subverts assumptions on the secular nature of the Enlightenment and of Staël as a liberal thinker. The book is tentatively titled Germaine de Staël and Revolutionary France: Religion, Morality, and Political Order and it portrays a much more original and nuanced thinker on all these counts than has been previously thought.

Prior to academia, Adela saw these ideas in practice through her work for a number of international organisations, including the Open Society Foundation, the European Commission, and Transparency International, on questions of EU accession, good governance, and especially the fight against corruption in her home country. Adela has also been very engaged in civic activism, especially on LGBT rights. For a number of years, she has been board chair of the Alliance against LGBT Discrimination, a community-based LGBT movement that she has helped establish in Albania since February 2009.

At UCL, she is also the History Department’s Study Abroad Tutor and PGT Careers Liaison Tutor for 2022/2023. 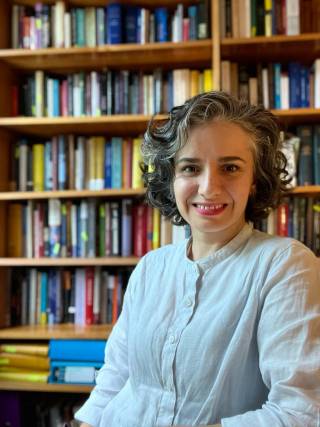