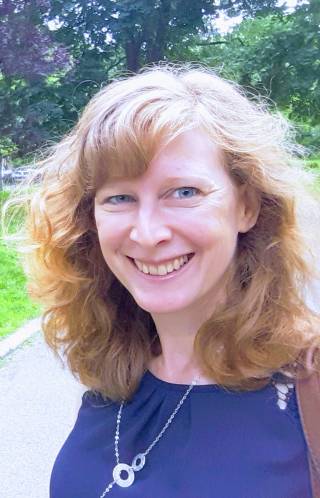 For Tamara, Hebrew teaching is bridging cultures, and enabling people to come together.

Tamara was born and educated in Israel, and has been teaching Hebrew as a foreign language since 1999 when she lived on a Kibbutz and taught the volunteers.

In addition to her career as a Hebrew teacher, Tamara has lead a parallel career as a journalist. Tamara worked for Channel 10 news on Israeli television, where she was a producer for a daily news broadcast. She was later appointed the London correspondent for the channel, where she covered current affairs and cultural events.

Deciding to focus full time on language teaching, Tamara started teaching English as a foreign language and Modern Hebrew in Cambridge and London. In addition to her work at UCL, Tamara also writes and marks the Modern Hebrew ‘A level’ exams, teaches the Hebrew International Baccalaureate programme, and is a Senior Teaching Fellow for Modern Hebrew at SOAS.

She lives in Cambridge, where she is the founder and executive director of Alumot, a Hebrew centre for culture and language.