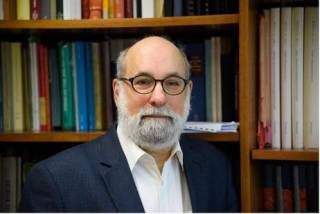 Professor Geller came to UCL's Department of Hebrew and Jewish Studies in 1976, when the Department consisted of only five members of staff and a handful of students. He completed his first degree at Princeton University in Classics, one year of which was spent at the Hebrew University of Jerusalem. He completed his PhD at Brandeis University in Mediterranean Studies, where he was introduced to several Semitic languages, including Aramaic, Akkadian, Ugaritic, and Arabic, and he wrote his dissertation on the subject of Aramaic magic bowls in relation to Rabbinic texts.

After coming to London, Mark studied Akkadian and Sumerian for several years with W. G. Lambert, and  subsequently spent a year (1980-81) in Munich at the University's Institute for Assyriology and Hittitology, as Alexander von Humboldt-Fellow, working with D. O. Edzard. The result of this work was his first book on Sumerian incantations texts known as Udug-hul ('evil demons'). It was during this period that the bulk of the work was completed on a volume of copies of Sumerian literary tablets from the British Museum, together with a Danish colleague, Bendt Alster.

In 1987-88, Mark received a grant from the National Endowment for the Humanities to work in Philadelphia and Chicago on Sumerian-Akkadian bilingual incantations. This was followed up by a year (19994-5) spent at the Netherlands Institute of Advanced Studies in Wassenaar, as part of a research group on 'Magic and Religion in the Ancient Near East'.

His inaugural lecture was delivered in 1994 on the subject of the survival cuneiform, providing evidence for the survival of cuneiform script into the third century AD. This research has provided the basis for his recent studies of connections between Akkadian and Aramaic magic and medical texts, particularly comparing cuneiform tablets with information in the Babylonian Talmud.

In the summers of 1996 and 1998 he received further grants from the Alexander von Humboldt-Stiftung to work in the museums and institutes in Berlin, Jena, and Leipzig.

Mark acted as Head of Department from 1984-1993, and since 1982 has served as Director of the Institute of Jewish Studies at UCL, in which capacity he has organised many conferences and public lectures.

In 2000-2001 Mark again received a fellowship from the Netherlands Institute for Advanced Studies in the Humanities, Wassenaar, and spent the year working in a research group on Greek and Babylonian medicine. This was followed by grants from the Alexander von Humboldt-Stiftung, to spend three months at the Max Planck Institut für Wissenschaftsgeschichte, Berlin, in 2002, 2007, 2008, and 2009.

He has also received a grant from the Wellcome Trust for the History of Medicine, to spend  2005-2006 in Paris working on ancient Babylonian medicine.

Mark is currently on secondment from UCL,  serving as Visiting Professor for the History of Knowledge at the Freie Universität Berlin.