UCL's Grand Challenge of Cultural Understanding worked on and supported a number of initiatives under the heading India Voices throughout 2017 and 2018.

The programme was cross-disciplinary in scope while being grounded in disciplinary excellence. Through community-engaged research, public and academic discourse and policy engagement, the aim of India Voices was to effect social impact. 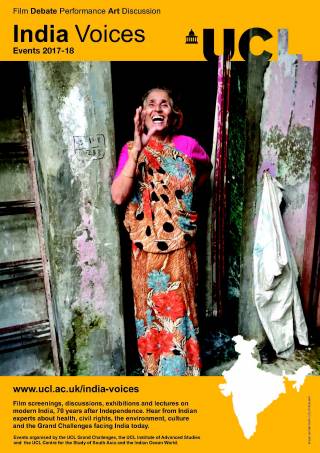 The India Voices season involved numerous events (detailed on page below) culminating in a celebration event featuring presentations and discussion addressing a range of topics including - challenging gender inequality, catastrophe prevention; using architecture to create healthier communities, engineering innovations for wheelchair-accessible cities, and other innovative studies tackling some of the most intractable problems facing India today.

The talks were followed with performances by Bollywood playback singer Sukanya Purkayastha and live musicians. There was also food, drinks, and stalls to explore and learn about UCL student activities.

Following the initiative, UCL's Centre for the Study of South Asia and the Indian Ocean World has now picked up the baton. It promotes research and teaching related to the geographical region of South Asia and its intersections with the wider world, including the South Asian diaspora.

Difficult Dialogues is an annual forum examining issues of contemporary relevance in South Asia, with a different yearly theme. Over three days, the forum hosts intensive discussions between diverse stakeholders: from policy makers, academics, and civil society, to politicians, leaders from media, business and international organizations, and rising young leaders. All discussions are managed to be respectful, factually accurate, and courageous.

In 2017, Difficult Dialogues partnered with the National Health Mission of the Government of India and UCL to explore the ambition of Health For All: an examination of the grand challenge India faces in providing access to high quality healthcare for all citizens. It included discussions under four broad themes: Inequalities in Health and Healthcare; Perceptions of Gender and Consequences for Health; Universal Health (Care) Coverage; and The Changing Burden of Disease.

Gurinder Chadha, the director of Bhaji on the Beach (1993), Bend It Like Beckham (2002) and Bride and Prejudice (2004) screened and discussed her latest film, Viceroy's House with a panel of UCL academics including Professor Margot Finn and Professor Chris Pinney, chaired by Dr Jagjeet Lally.

Talk: Indian Ocean Histories and Modern Art with Dr Subodh Kerkar from the Museum of Goa

Trained as a doctor, Kerkar has been producing installations for over 20 years, which he has exhibited in India and around the world. Dr Kerkar spoke about how he tells history through artwork, with a response from Dr Sujit Sivasundaram (University of Cambridge), and chaired by Dr Jagjeet Lally (UCL).

The conference covered Gandhian perspectives on justice, education, nonviolence, and health, as well as a focus on village India and how innovations can help the poor and needy so as to help reduce inequalities in society.

Professor Michael Arthur, President & Provost of UCL, chaired a discussion and debate on the challenges to gender justice in India most notably cultural, social, and policy reform, and the mechanisms through which to effect this.

Talk: In Conversation with Talvin Singh

Musician, programmer and producer Talvin Singh, winner of the 1999 Mercury Music Prize, was in conversation with Dr Tariq Jazeel in an event hosted by UCL's Institute of Advanced Studies in collaboration with the Centre for the Study of South Asia. Singh discussed his current and early work, the role of creativity, experimentation and fluidity in his music, as well as its broader relevance for Britain's South Asian diaspora, for British multicultural more generally, and in India and beyond.

Feminist author and publisher Urvashi Butalia delivered the third annual Cities Imaginaries lecture at UCL's Urban Laboratory. The talk focused on the story of Mona Ahmed, a hijra, in the city of Delhi. The story unfold through the friendship between two women, and their extended conversations over more than a decade, and explored issues of urban life, citizenship, marginality and sexuality.

In one of the first UK screenings, Urban Lab Films presented the award-winning Cities of Sleep, a documentary displaying the tremendous social and political pressure that sleep exerts on the homeless in Delhi, where securing a safe sleeping spot can often become a question of life and death. At the event, the film's director and an expert panel discussed the issues raised in the film.

Aromar Revi discussed the contradictions and congruities of Indian urban futures in the context of climate change, drawing out some of the key implications for governance, planning and education. Revi is Director of the Indian Institute for Human Settlements (IIHS), India's prospective independent national University for Research & Innovation addressing its urbanisation challenges through an integrated programme of education, research, practice and training.

Film Screening: Beyond the Adorned Veil

The film tells the story of the women who perform Lavani - a traditional dance form from Maharashtra - and explores the places where the dance is performed. Their stories are full of love, pain, power, seduction, survival, expectations, dreams and ultimately segregation from Indian society. The event was followed by a Q&A with the film's director, Savitri Medhatul, and producer Bhushan Korgaonkar.

Following an interactive dance workshop providing an English-language introduction to Lavani choreography, singing, body language and improvisation techniques, Savitri Medhatul and Bhushan Korgaonkar discussed how they have engaged over the last decade with the orientation, history and practice of Lavani. They spoke about how their interests in Lavani developed and the challenges and opportunities they encountered. In particular, they seek to open up a focus on how traditional cultural forms can be reactivated and reimagined for urban audiences without compromising their social relevance, and outline possible further thematic routes and collaborations for their research and activities on Lavani.

A film inspired by the real-life ordeal of 64-year-old Professor Siras who was suspended by Aligarh University, ostracised, and subjected to psychological torture because of his sexual orientation. The screening was followed by a discussion with the film's screenplay writer, Apurva Asrani, and UCL historian Dr Florence Sutcliffe-Braithwaite.

A discussion with noted photographers Sunil Gupta and Charan Singh (authors of the photo book, Delhi: Communities of Belonging), as well as Drag King India Project founder Indu Antony, and Queerala Artists collective founder Jiji Kuriakose to learn about their work, their subjects, and the power of photography and art to capture private personas and public lives led against the backdrop of homophobia.

In a lunchtime lecture, experts from UCL and India explored the history of the healing plants of India. The talk outlined how the plants have been documented through colonial times and their properties are now being confirmed with modern scientific methods.

Dr Prashant Jha, Fellowship Director of the BioDesign program at the School Of International Biodesign, AIIMS, New Delhi, delivered a lecture on affordable medical innovation. Dr Jha has developed a range of medical devices and trains health tech leaders. The talk posed the question, can this work be something to teach the UK, in the quest to adopt cheaper, smarter health technologies?

> view more videos from the India Voices series, including from the Difficult Dialogues events in Goa, on YouTube.