Exploring the impact informal settlements and segregated communities have on access to formal education. This collaborative project sought to anaylyse the post-2008 dynamics of the housing market in Chile which have deepened urban inequalities regarding access to housing, affordability, and residential segregation. In 2021, 81,643 families live in 969 campamentos (self-built settlements) in Chile, the highest number since 1996. The project sought to develop understanding as to what extent Chilean and migrant families living in marginalised residential areas look to the education system as a vehicle for social integration and to more broadly analyse the impact informal settlements have on access to formal education.

It recognised mutual aid activities and social networks' dynamics oriented to tackling structural inequalities driven by the state and the market and sought to assess how the possibilities for integration are differentiated between Chilean and migrant families living in campamentos.

Through conducting evidence-gathering interviews, undertaking a qualitative study of community housing and education needs using an observatory participation approach, convening three community assemblies, networking with NGOs to link community ideas with initiatives, the project conducted engaged research with the researchers acting as both observers and catalysers to explore the socio-spatial dynamic of the campamentos in Santiago. This led to the project producing a sociospatial analysis and mapping of the informal settlements. With a central finding of the analysis being the absence of the State.

In addition, together with NGOs, private companies and other interest groups, the project developed a community area within the campamentos (this included building a community kitchen, conducting eduational workshops, introducing the concepts of right to housing). This led to the formalisation of mutual aid activities among different groups due to the project acting as a 'neutral broker' and creation of recognition of need for collaborative research to produce benefits for all actors. As a result, and following the findings collated during fieldwork, the interactions led to the organisation of new alliances within the campamentos and resulted in educational activities, tactical urbanism interventions and alliances between representatives and groups working in two of the three campamentos. 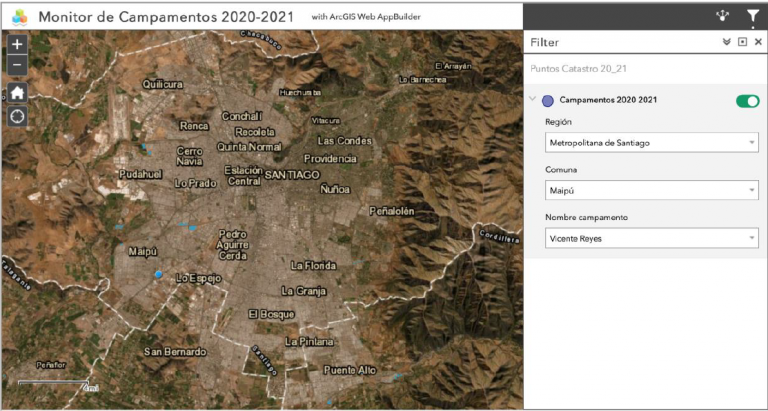