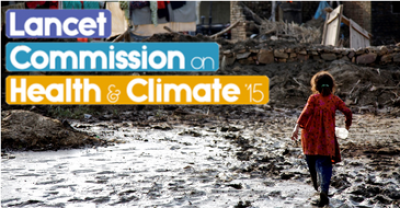 The 2015 UCL-Lancet Commission on Health and Climate Change was formed to map out a comprehensive response to climate change, in order to ensure the highest attainable standards of health for populations worldwide. This Commission is multidisciplinary and international in nature, with strong collaboration between academic centres in Europe and China.

1) The effects of climate change threaten to undermine the last half-century of gains in development and global health. The impacts are being felt today, and future projections represent an unacceptably high and potentially catastrophic risk to human health.

2) Tackling climate change could be the greatest global health opportunity of the 21st century.

3) Achieving a decarbonised global economy and securing the public health benefits it offers is no longer primarily a technological or economic question - it is now a political one.

4) Climate change is fundamentally an issue of human health, and health professionals have a vital role to play in accelerating progress on mitigation and adaptation policies.

Director General of the World Health Organization, Dr. Margaret Chan
Federal Minister of Health, & State Minister of Environment and Forests, Ethiopia
Asia Editor & Editor in Chief of The Lancet
The Archbishop of Canterbury & The Archbishop of Constantinople
Joint Statement from the Pharmaceutical Industry
Statement from The World Bank Group
Blog posts from UCL co-authors