We regularly hosts a public lecture named in honour of the poet, playwright, painter and musician Rabindranath Tagore (1861-1941). 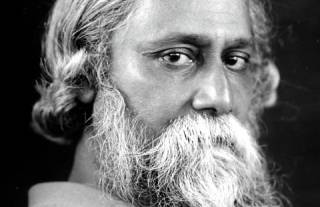 Tagore’s eminent figure looms large in the history of UCL, a university which he joined briefly, in 1878, to read law and which he left without a degree. One hundred forty years later, Tagore is widely hailed as a model of the cosmopolitan spirit that informs comparative literature in an age of rapidly shifting global cultural and political constellations.

Tagore’s heroic vision of world literature (visva bharati) opposes hate-mongering nationalism at every level. His celebration of artistic creativity as wasteful spending (bājē kharaca) seeks to preserve the exuberance of poetic invention across all fields of inquiry and takes the excitement of drama, poetry, song and painting into society – and into the classroom and the lecture theatre.

Our goal is hence to establish long-term perspectives that foster creativity in research, education and enterprise, and to encourage new generations of thinkers in their pursuit of a collaborative, cosmopolitan, critical and creative understanding of our present, its past and the futures it may inspire.

The lecture is delivered by a scholar of international distinction.

Rita Felski is William R. Kenan, Jr., Professor of English, University of Virginia and Niels Bohr Professor, University of Southern Denmark. Professor Felski is one of the most influential figures in literary studies today. Her claims about "the limits of critique" and "the postcritical turn" continue to engage both scholars in the field and broader audiences. Felski's books include Critique and Postcritique (Duke University Press, 2017, co-edited with Elizabeth Anker), The Limits of Critique (Chicago University Press, 2015), Uses of Literature (Wiley-Blackwell, 2008), and Literature after Feminism (University of Chicago Press, 2003).

Prof. Felski’s talk makes a case for attachment as a key word for the humanities. To be attached is to be affected or moved and also to be linked or tied. It includes passion and compassion, but also ethical, political, intellectual, or other bonds. Drawing on a range of examples, Prof. Felski will discuss two common attachment devices: identification and attunement. She will conclude by clarifying the relevance of attachment for pedagogy and for practices of interpretation in the classroom.

This lecture suggests that the contemporary moment sees a crisis in the experience of temporality and sequentiality, that can be felt across the anglophone world.

There are a set of emerging political and ecological conditions, that offer a serious challenge to the way that we have conceived of the passage of historical time.

It is difficult at the present moment, I will suggest, to generate clear pictures of the future, either of Europe, or of our wider planetary environment.

The lecture addresses this crisis, by examining the forms in which some contemporary British authors give poetic expression to the claims that the past has on our experience of time, and by suggesting how such pictures of the past yield new ways of imagining a European future.

Peter Boxall is Professor of English at the University of Sussex. His books include Don DeLillo: The Possibility of Fiction (Routledge: 2006), Since Beckett: Contemporary Writing in the Wake of Modernism (Continuum: 2009), Twenty-First Century Fiction (Cambridge: 2013), and The Value of the Novel (Cambridge: 2015). He has edited a number of collections, including Thinking Poetry and Beckett/Aesthetics/Politics, and a Faber edition of Beckett’s novel Malone Dies. He is co-editor, with Bryan Cheyette, of volume 7 of the Oxford History of the Novel in English, and editor of the Cambridge Companion to British Fiction, 1980 – The Present. He is also the editor of Textual Practice and 1001 Books. He is currently completing a book entitled The Prosthetic Imagination: A History of the Novel as Artificial Life.

To better understand bestselling fiction, Matthew Jockers and research partner Jodie Archer took the advice of Google researchers who argue that we should "embrace complexity and make use of the best ally we have: the unreasonable effectiveness of data.”

Instead of seeking a formula or telling authors how to write a successful novel, Jockers and Archer went to the books, thousands of them, and leveraged computation to ask a simple question: "what are these texts made of?"

The bold claim of their research, documented in The Bestseller Code, is that novels that hit the New York Times bestseller list are not random lottery winners but books that share an uncanny number of textual features.

In this lecture, Jockers will describe how he went from being a close reader of language in Joyce's Ulysses to mining thousands of novels in search of the linguistic patterns most typical to books that best sell.

Matthew L. Jockers is the Susan J. Rosowski Associate Professor of English and Associate Dean for Research and Partnerships in the College of Arts and Sciences at the University of Nebraska. He is a Faculty Fellow in the Center for Digital Research in the Humanities and Director of the Nebraska Literary Lab. Jockers’s research is focused on computational approaches to the study of literature, especially large collections of literature. His books include Macroanalysis: Digital Methods and Literary History (UIUC Press 2013), Text Analysis with R for Students of Literature (Spring 2014) and, with Jodie Archer, The Bestseller Code: Anatomy of the Blockbuster Novel (St. Martins 2016). His research has been profiled in the academic and main stream press including features in The Wall Street Journal, The New York Times, Nature, The Chronicle of Higher Education, Wired, New Scientist, Smithsonian, NBC News and many others