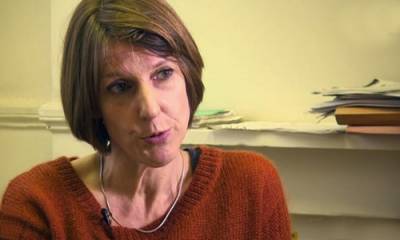 I am interested in the novel, narrative technique, literary theory and theories of gender. I have worked on the interaction of fact and fiction in the novel, on the relationship of female and national identity, and on the representation and ethics of shame. I'm currently the Co-Investigator on the AHRC funded project 'The Reverberations of War' and am working on a comparative study of the role of comedy in the representation of suffering in the work of post-war German-language writers and directors.

This project explores the way in which the traumatic effects of conflict are aesthetically transformed into cultural products that elicit pleasure. I focus on texts and films that are concerned with suffering and victimhood and which incorporate a comic or humorous dimension. The relationship of suffering and humour crystallizes the questions of how far the representation of trauma produces pleasure and how such pleasure can be understood. Furthermore, I'm interested in the way in which melancholy and melodrama, both sensibilities that emphasise and privilege suffering, are put into question by the use of comedy, and how comedy can help expose melodrama and melancholy as gendered responses to suffering. Authors and directors include IngeborgBachmann, Rainer Werner Fassbinder, W. G. Sebald and Reinhard Jirgl.

My earlier research projects include the analysis of how fact and fiction are combined in novels exploring the lives of historical women. Recasting Historical Women focused on eight contemporary German novels that reconstruct women's lives by combining fact with linguistic and narrative invention. Protagonists include Cornelia Goethe, Caroline Schlegel-Schelling, Karoline von Guenderrode and Charlotte Corday. By examining the ways in which the women's biographies are represented, wider issues of female identity, feminism and historiography are illuminated and discussed, as well as the ways in which historical events are used to substantiate ideological positions in the present.

In Women Writers and National Identity, I look at the twin themes of female identity and national identity in the fictional narratives of Ingeborg Bachmann, Anne Duden and Emine Özdamar. I argue that the complexity and contradictions of identity are closely tied to the ambiguities and tensions of the narratives. I draw on feminist theory and psychoanalysis to explore the processes involved in identity and identification, and suggest too that literary texts are uniquely able to point to the ethical importance of ambiguity through their stylistic complexity.

Following on from this work on identity, I have also engaged with the affect of shame, how it relates to notions of guilt and transgression and how these concepts are figured aesthetically. My interest in shame led to close analyses of particular moments of shame in German and Austrian literature, including the work of Wilhelm Raabe (Stopfkuchen) and Robert Musil ('Die Vollendung der Liebe', Die Verwirrungen des Zöglings Törleß). In analysing these texts I have been particularly interested in considering the relationship of shame and narrative ethics.