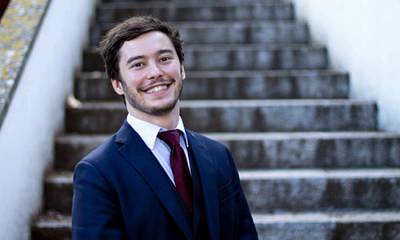 José joined the UCL European Institute as a Research Intern through the Laidlaw Scholarship in June 2017. He is an undergraduate student of the BASc Arts and Sciences. He majors in Societies with a focus on Politics and Economics and minors in Health and Environment with a focus on Development and Public Health. He also studies French as part of his degree. Having been awarded the Laidlaw Scholarship he will be joining the institute's academics in exploring the effects that differences in political culture between the EU and the UK might have on the Brexit negotiations.

Outside UCL, José has been actively involved in the European Youth Parliament for almost 4 years. He has taken various roles in over 30 events of this organisation in more than 13 countries. He currently holds a position as Vice President of the European Youth Parliament Portugal on International Affairs through which he represents the Portuguese members of the organisation in international negotiations of the network. More so, he is also currently supervising the implementation of the Understanding Europe project in his home country in cooperation with the Schwarzkopf Foundation. Through it, he aims to facilitate the delivery of hundreds of crash-courses on the EU in high schools all around the country in the upcoming years.