Modernist artists, including Epstein, Moody and Manley, took their inspiration, in part, from ancient sculpture to create visual representations of metaphysical subjects. These included the spiritual within humanity, ideas of the self, birth, gender and sexuality and, in the case of Manley, the medium of sculpture was used to represent spiritual life and beliefs in the Caribbean.

Early twentieth-century archaeologists held many assumptions about ancient figurines of women, presuming they were not of individual women but symbolic of a universal idea of 'womanhood' connected to fertility and birth. The historian Stephanie Lynn Budin has argued that 'anonymous females, especially of Near Eastern extraction, have also been repeatedly identified not merely with the concept of fertility but as some universal "Earth Mother Fertility Goddess."' Modernist artists, as seen in Epstein's and Moody's work, did visualise male figures to represent ideas of fertility but the idea of the 'Earth Mother' was a powerful symbol for early twentieth century artists.

The small terracotta predynastic figurine was found in a cemetery at Qau, dating to between 3700 and 3100BC BC. The excavation was organised by archaeologists Guy Brunton and Gertrude Caton-Thompson, who recognised the settlements in the area as belonging to an early farming culture now known as Badarian. 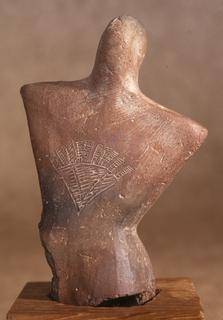 Back of Predynastic Figurine UC9601

It is not clear if this figurine belonged to Badarian culture; neither is it clear what its function is or what the symbol on the back means. It has been perceived as a fertility symbol or female figure of worship though there is limited evidence for this; as Petrie Museum curator Alice Stevenson points out, these female figurines are extremely rare among the grave goods found from this period.

Its significance - spiritual or otherwise - is now immersed with the simple aesthetics of its abstracted form. In 2014 this diminutive figurine was displayed alongside work by Barbara Hepworth, Anish Kapoor and others in the Forme Simples exhibition at the Pompidou-Metz Centre, Paris.

Moody's philosophical beliefs exhibit themselves in his work in multifaceted ways. Annie portrays a vision of calm and tranquillity and was perhaps formed with ancient Egyptian sculpture in mind. It is one of the twelve pieces which were sent to the Harmon Foundation for their 1939 exhibition on 'Contemporary Negro Art.'

During the 1930s, Edna Manley powerfully represented Caribbean experiences and culture as well as political and spiritual life, particularly in her work influenced by the Caribbean spiritual practice of Pocomania. She also explored Greek and biblical symbols of life and, inspired by Caribbean culture, created pieces including Demeter (1925) a representation of the Greek 'Earth Mother' and her 1929 piece Eve pictured here. 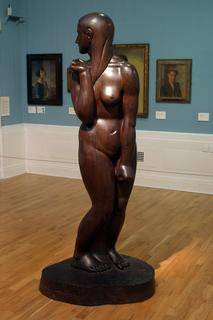 Epstein's work explored spirituality, belief, sexuality and humanity in unconstrained ways which were opposed by many conservatives in the art world, yet were influential for other sculptors. Epstein's work presented a range of spiritual traditions; inspired partly by Egyptian sculpture - particularly predynastic figurines and the Amarna period - he represented ancient Egyptian sun worship in Sun Goddess Crouching (1909-1910) and Sun God (1910). He fused many cultural influences in works symbolically representing women, maternity and birth such as Genesis (1931), where he represents the earth's mother, and in Maternity (1910). 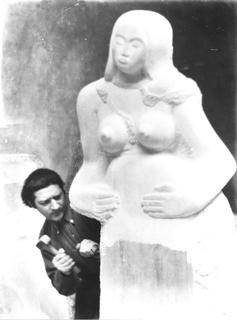