The Harlem Renaissance was a twentieth-century African-American movement in art, culture, literature, film, publishing, jazz, and politics. The renaissance explored and created a 'New Negro' culture and identity, with African-Americans producing art and literature on their own terms. It is a key example of twentieth-century modernism. Modernist art has been thought of as a movement led by mainly white European and American artists, who were influenced by African, Asian and 'Oceanic' cultures. The centrality of twentieth century African diaspora artists in creating new forms of modernist art has been neglected.

Several Harlem Renaissance artists studied or travelled to European cities and met and shared ideas with artists of various cultural backgrounds, including those from the Caribbean and Africa. In Harlem, African-American artists collaborated with one another through publishing magazines, composing music, creating art and writing for African-American-run publications such as The Crisis, Opportunity, and Fire!

Harlem Renaissance artists often included in their artwork reflections on modern African-American experiences alongside other African diasporic cultures and significantly looked at ancient African material cultures, particularly Ancient Egypt, as one element in which to re-create and re-frame modern black identities. The use of ancient symbols and histories within the Harlem Renaissance was a cultural and political endeavour, challenging racist views and reclaiming histories of African civilisations.

Ancient Egypt in the Harlem Renaissance

Novelists and poets, such as Langston Hughes in his 1920 The Negro Speaks of Rivers, also referenced ancient Egypt in their work. Artists including Aaron Douglas created new abstract forms of often Egyptian-inspired art, defined by art historian Richard Powell as Afro-Cubist. These works highlighted ancient cultures but also sought to represent current African diaspora experiences and the future desires of African-Americans. 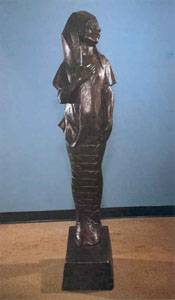 A key example of Egyptian symbolism within early twentieth-century African-American artwork is Ethiopia Awakening (c. 1910) by Meta Vaux Warrick Fuller; a sculpture of an African-heritage woman with Egyptian headdress emerging and awakening. Several African-American artists, including Joyce Carrington and Charles C. Dawson, produced paintings and drawings inspired by ancient Egypt for the African-American publication The Crisis: A Record of the Darker Races. The Crisis was edited by African-American writer and intellectual W.E.B. Du Bois and included reports on the political situation of Egypt; for example in June 1921 nationalist leader Saad Zaghlul was celebrated as one of the 'Men of the Month'.

One of the most significant Harlem Renaissance artists was Aaron Douglas, who used symbols and visual representations of ancient Egypt in diverse ways. Douglas was the creator of some of the most iconic visual interpretations of twentieth century African-American culture. In 1926 Du Bois commissioned Douglas to design a poster promoting the Krigwa Players, an African-American theatre group, which included Du Bois, Zora Neale Hurston, Douglas himself and Charles Burroughs. Douglas, in this Afro-Cubist work, features a woman of African heritage alongside visual icons of African culture, including a pyramid, the Sphinx and a mask. This image comes from the front page of the 1926 season programme and it appeared in The Crisis in May 1926. 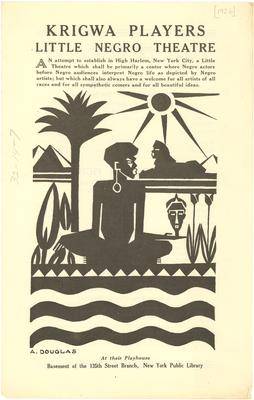 The theatre was based in the 135th Street branch of the New York Public Library, an important centre of Harlem cultural life which exists today as the NYPL's Schomburg Center for Research in Black Culture.