Ronald Moody was a Jamaican artist born in 1900 who migrated to Britain in 1923 to study at the Royal Dental Hospital, King's College, London. He qualified as a dentist in 1930 but after a few years he decided he would be a sculptor. His work spanned decades and during this time he produced a number of significant sculptures and was the source of inspiration to many artists globally.

Moody also wrote radio programmes and was a broadcaster for a number of shows. In migrating to interwar Britain, he joined his brother, Harold, who worked in Peckham as a GP, and in 1931 co-founded the influential anti-racist organisation the League of Coloured Peoples.

During his time as a dental student, Ronald Moody socialised with artists and explored philosophy, particularly Indian and Chinese philosophy, which were to become important influences on his spiritual life and art. His decision to become an artist was the result of visiting the British Museum's Egyptian galleries during the late 1920s. His niece Cynthia Moody recalled 'he was transfixed by what he saw and by his response to what he described as "the tremendous inner force, the irresistible movement in stillness, which some of the pieces possessed." From that moment he had no doubts. He would become a sculptor.'

In many of his writings Moody has reflected on being drawn to the art of Ancient Egypt. In his 1950 BBC radio broadcast on Egyptian Art for the overseas service 'Calling the West Indies' he began by reflecting on a British Museum visit to view Egyptian artefacts, where he had been 'particularly struck by the perfect craftmanship shown in a wooden comb.' This same comb (Coptic period, museum number E.A.51071) has been on display in The Origins of the Afro Comb: 6,000 years of culture, politics, identity exhibition at the Fitzwilliam Museum in Cambridge. 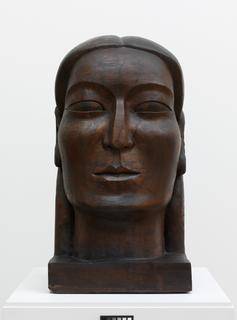 Moody started carving in wood in the 1930s, completing his first piece Wohin in 1934. He produced several other wood carved pieces during the 1930s, including Johanaan (1936), and Midonz (1937). In London, his work was included in the 1935 exhibition on 'Negro Art' which took place at the Adams Gallery in Pall Mall as well as in the United States in the Harmon Foundation's 1939 exhibition 'Contemporary Negro Art' at the Baltimore Museum of Art. He held one-person shows in Paris (1937) and Amsterdam (1938).

When the Second World War broke out, he and his wife Helen were living in Paris, and managed to escape Paris just before the German invasion, but were stuck in Marseilles for many months before being able to return safely to England. His experiences in wartime France had a lasting impact on him. Moody spent much time and energy trying to have the artworks returned from the United States. 11 of the 12 pieces were returned but he never got to see Midonz again.

His niece Cynthia Moody was the trustee of his archive and carried out important research on his art and life. Learning about Midonz, she 'came to realize how much Midonz had meant to Ronald, and that he had never really reconciled himself to its loss.' She tracked down the piece to Hampton University Museum in Virginia and it was returned in 1994. She reflected that Midonz was a 'harmonious blending' of pre-Columbian and Ancient Egyptian cultures and that 'above all, Midonz epitomizes "the tremendous inner force, the irresistible movement in stillness" that transfixed Ronald when he first encountered Egyptian art at the British Museum in 1928, and which aroused in him the compulsion to create, to become a sculptor.'