Mahmoud Mukhtar's most famous sculpture Egypt Awakened (also known as Egypt's Renaissance or Nahdat Misr) was unveiled in 1928 at a public event attended by thousands of Egyptians and foreign dignitaries. This modernist colossal public piece of art triumphantly represented Egypt - past and present - at a time when Egypt achieved political independence in 1923 after forty years of British occupation.

Mukhtar's work is identified with early twentieth-century Egyptian nationalists and Pharaonist (i.e. drawing on Ancient Egyptian colossal sculpture) aesthetics. Mukhtar had been the first student to enrol in the Egyptian School of Fine Art in 1908 and went to Paris to continue his education in art in 1911, where he met the nationalist leader Saad Zaghloul in 1919.

Nahdat Misr depicts a colossal sphinx and woman raising up her veil. The sphinx represented antiquity and the woman was the symbol of an awakened Egypt standing on a green base that possibly denoted Islam. The figure of the woman was a reference to the Egyptian women's movement led by Huda Sha'arawi, who decided to go unveiled in 1922 and had organised anti-British demonstrations. Mukhtar choose granite from Aswan in Upper Egypt as the material to symbolise the unity of the country. 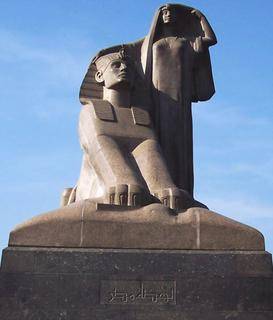 Mukhtar had first exhibited a small version at Paris in 1920 where Egyptian members of the nationalist Wafdist movement saw it. There followed a campaign for private funds to build a larger version but eventually a large sum of Egyptian public funds were spent on it. The nationalists hailed the work, while opponents used it to be critical of the new Egyptian government. 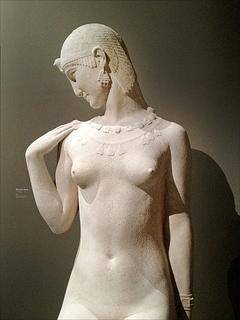 After returning from Paris Mukhtar became involved in the Wafd party, a nationalist liberal political party which was dominant in the first independent government. He subscribed to the 'Nahda' ideal of an Egyptian cultural and national renaissance, as the title of this sculpture makes clear. The discovery of the tomb of Tutankhamen in 1922 occurred just as Egypt was granted a form of political independence and fed the pharaonist iconography that was important in the nationalist movement.

The artwork stands today at Cairo University Gate, being moved from its original location of Ramses Square. Its creation represents the complex historical relationship between art, artists and politics.

Read 'Between the Palace and the Street: Mahmoud Mukhtar and the Fate of Egyptian Art Today' by Sam Bardaouil (Huffington Post, 29 March 2011)

Can art works that linked to political ideologies be effective - artistically, politically or both? What problems can there be?

Assess the background to British Rule in Egypt by 1922 and consider the discovery of Tutankhamen's tomb. Why do you think this discovery was important for Egyptian nationalists and why did the objects from the tomb remain in Egypt?