Jacob Epstein was one of the most significant British artists of the twentieth century; specialising in sculpture, particularly public sculpture, his pieces both challenged and influenced British art conventions. Despite having a number of supporters, Epstein's work was often criticised by the public and the media; often this opposition was antisemitic and nationalist. 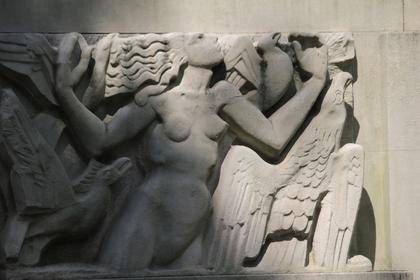 A number of Epstein's public works can still be seen in London and this is a short guide:

Epstein was born to Jewish parents, originally from Eastern Europe, in 1880 in the lower east side of New York where he later drew its diverse cultures. He portrayed ethnic diversity throughout his career, focusing on portraiture of models of African and Asian heritage.

In 1905 Jacob Epstein moved to London from Paris and immersed himself in the British Museum where he was influenced by the variety of sculptural styles. Epstein also became heavily involved in The London Group, a cutting edge group of artists, and visited artists, such as Modigliani, in Paris.

Start at the British Museum for some context to Epstein's work; particularly in the African, Greek and Ancient Egyptian galleries. Epstein's sculpture Flenite Relief (1913) depicts a woman giving birth on one side and the appearance of the baby's head on the other. The polished black marble and symbolic simplicity of this work seems startlingly early Egyptian in form and can be compared to early sculpture in the British Museum.

Epstein was influenced by art from antiquity throughout his life and took an active interest in the antiquities in the British Museum. In 1921 he noted the change in the patina (a thin layer above the marble) on the Demeter of Cnidus (on display in Room 22: Alexander the Great) and, in a letter to The Times, accused the museum of damaging the sculpture to make it 'white'. Epstein's accusations attracted more attention in the 1930s when a small number of the Parthenon Sculptures were found to have been 'over-cleaned'.

Epstein's own collection of sculpture illustrates his interest in myriad forms of style and aesthetics. His collection included over a thousand objects, primarily west African, 'Oceanic', precolumbian American, and ancient Egyptian. The Egyptian items included vases, pots, jewellery, reliefs, and statues, including for example a XIX 'Dynasty Seated figure of a high official and his wife', and a predynastic cosmetic palette.

Near to the British Museum is one of Epstein's late sculptures (1956-9), a colossal monument to the dead victims of World War One and World War Two in the forecourt of Trace Union Congress (TUC) House on Great Russell St. It is a 15 minute walk from here to what remains of his first public commission on the Strand.

Allegory on the Strand

In 1907 Epstein received a prestigious commission to execute and design a series of sculptures by the architect Charles Holden for his British Medical Association (BMA) building on 429 Strand. The sculpture Hygeia was directly influenced by Greek sculpture in the British Museum. These pieces highlight Epstein's desire to represent open ideas towards sexuality; often his works around sexuality or the body were perceived as 'immoral' and attacked. His work for the BMA building - a series of nude male and female allegorical figures showing fecundity and decay of life - caused outraged complaints from the National Vigilance Association and the Catholic Church. In 1908 people were flocking to look at the sculpture, there was a media frenzy around the figures and the police even visited Epstein at work due to complaint of obscenity.

Epstein was shaken by the vehemence of the campaigns against his work, but other artists supported him - including Eric Grill, Walter Crane and the Director of the National Gallery Charles Holroyd. There was a serious threat to destroy Epstein's work but the BMA eventually decided that the sculptures were in keeping with the building. The Bishop of Stepney, Cosmo Lang, tried to lessen the moral outrage by blessing the sculptures. 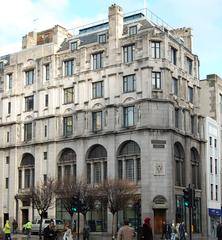 The BMA building, now Zimbabwe House, and a close up of the mutilated sculptures © Debbie Challis, 2014.

The Southern Rhodesian government bought the building in 1935 and, against much opposition from Epstein and many leading members of the art world, in 1937 the sculptures were destroyed and mutilated as they considered them 'inappropriate.' However, you can still see fragments of them today - it is best to look from across the road.

Get the tube from Embankment station just south of the Strand to St James' station on the District Line. Epstein's colossal Day and Night (1929) statues are on 55 Broadway Building, over St James' station. The building was also designed by Charles Holden (see above) for the Underground Electric Railways (UERL), a forerunner of today's London Underground or Transport for London. 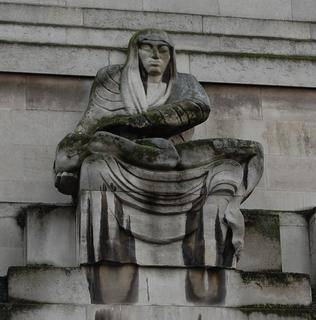 Epstein commented that he always turned to Egypt for inspiration for architectural or monumental sculpture and the influence of Egypt and other cultures is clear in these abstract figures. Egyptologist Flinders Petrie protested about the style of the sculptures, denouncing them as 'part of the modern system of Jazz' and racialising them as a 'primitive product of a race'. Petrie was only one of a number of people who publicly protested; he classical archaeologist Percy Gardner felt the sculptures lacked 'morality' and there was consternation about the length of the boy's penis on Day. 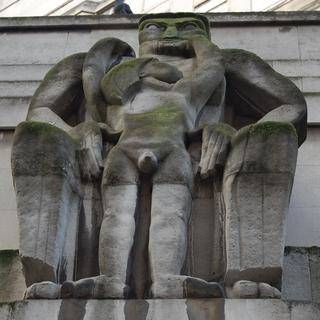 Epstein shortened the boy's penis by an inch. Frank Pick, the Managing Director of the UERL, robustly defended Epstein's sculptures. Night and Day are still on 55 Broadway, along with reliefs of the winds by Eric Gill, Allan G. Wyon, Alfred Gerrod, Eric Aumonier, Samuel Rabinovitch and Henry Moore, making it an important modernist building in London.

In 1922 Jacob Epstein was commissioned to create the Hyde Park memorial to the naturalist writer W.H. Hudson. The memorial was unveiled to the public in 1925; carved in Portland Stone the relief represented Rima, a character from Hudson's book Green Mansions who was both human and bird. The initial drawings for Rima and the final sculpture show diverse influences including Assyrian art; a direct influence was a relief representing Aphrodite from the ancient Greek Ludovisi Throne. Rima highlights Epstein's thoughts on humanity, sexuality, and gender as well as his ideas on how the concept of 'beauty' was subjective and often restrictive.

Rima was the subject of hostility from those opposed to what they viewed as his 'ugly' and 'unfeminine' portrayal of the female body. His sculpture was defaced and the Daily Mail campaigned for the removal of the sculpture. Epstein was also subjected to antisemitic abuse and in 1935 the Independent Fascist League defaced Rima with swastikas. Much of the opposition to Rima as a piece of artwork went hand-in-hand with racist formulations of Epstein as an 'alien' outsider and his artwork as unEnglish.

There were also supporters of Rima; a public letter of support for Epstein was sent from Muirhead Bone at the Burlington Fine Arts Club and was also signed by George Bernard Shaw, Michael Sadler, Glyn Philpot, Samuel Courtauld, Laurence Binyon, Frank Dobson, Ramsay Macdonald, and W. Rothenstein. In a 1929 article in the New York Times, James Bone reflected on the hostility towards Rima but pointed out that 'it [was] becoming a place of pilgrimage to young sculptors and to those Londoners who want to take visitors to see the stirrings of new art in the old capital.