The Black Presence in Vienna

Angelo Soliman - An African in Vienna

This exhibition examines the life of Angelo Soliman, the 'court Moor' who lived in Vienna from 1753 until his death in 1796.  Soliman is, according to the curators' introduction, part of the mythologies of Vienna, partly because of his exceptional life, but also because of the desecration his body for the Imperial Cabinet of Natural Curiosities after his death.  As the curator(s) acknowledge, the treatment of Soliman after his death undermines the celebratory narrative of assimilation that he has often been used to represent.  Soliman's story embodies the tension between belonging and acceptance on the one hand and the disdain for Africans held by Europeans on the other. 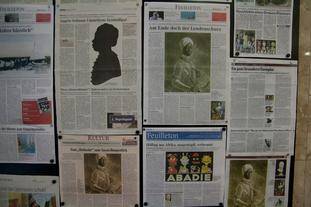 The informative, stimulating and impressively presented exhibition tries to unravel the contradictions inherent in 'African Vienna', from its examination of the slave trade (from the African interior to Europe via Messina, Sicily, which was a Hasburg dominion from 1720-1735), to reflections on Soliman's life given by eight Africans living in Vienna today.  The exhibition's substantial narrative (I spent nearly three hours there) is created with a wide array of objects from large scale oil paintings to fine engravings, anthropological artefacts, maps, slave shackles, swords, coffee pots and photographs.  All the material - panels and object captions - have English translations accompanying them.

Soliman's life is certainly an extraordinary story.  The exhibition leads the visitor through a largely linear narrative, illustrating the African world of Soliman's childhood.  Born around 1721 in sub-Saharan Africa (it is not known where), Soliman was enslaved as a child and sold to a Sicilian family before becoming a personal attendant of Field Marshal Prince Lobkowitz. From 1753 Soliman lived in Vienna, where he played an important role in the household of Prince Liechtenstein.  He was a tutor to the prince's children, but also performed as an exotic 'showpiece' at court.  A gambling win enabled him to marry.  When marriage led to his dismissal from the prince's household, Soliman was able live as a private gentleman with his family in a suburb of Vienna.  Soliman became a freemason and one exhibit, a register of members for an exclusive Lodge, shows Soliman's signature alongside that of Mozart who was also a member.  Still, little is known of Soliman's private life, his political views or why he resigned from the Lodge in later life.  Despite losing his fortune, his last place of residence was on the Freyung, in a comfortable quarter of the city.

Moving through the exhibition the curators seek to expand the contextual geographies of Soliman's experience.  In 'African Vienna' the curators list some of the Africans who lived in Vienna at the same time as Soliman.  There were at least 40 Africans in Vienna, and the curators estimate that up to 200 Africans could have been living and working in the city.  They include Jakob Ali (birth date unknown c1789) and Michael Anjou (ca 1774-1799).  The curators do not provide information on how they extracted these individuals from the archives but, like in England, there are many such as Peter Weiß (ca 1736-1754), Carl Paston  (1732-1790) and Theresia Martin (1720-1761), who would not be picked out through a surname search.

Theresia Martin is one of very few women to be mentioned in the exhibition.  The European fashion for aristocratic portraits to include young black servants is represented by two large oil paintings creating spaces for elite women.  One, a portrait of Louise de Kéroualle, Duchess of Portsmouth, 1682, usually hangs in the National Portrait Gallery, London.  The other, a portrait of Henriette Karoline of Hess (ca 1750), depicts a young slave boy holding up crimson roses to his mistress.  His pose reminded me of the young man depicted in the portraits of Henrieta of Lorraine in Kenwood House, London.  Both portraits emphasise the European connections throughout the history on display. 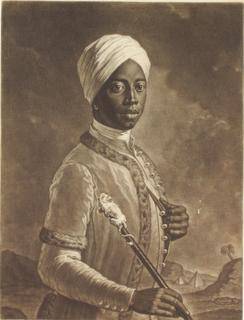 More closely connected to Soliman's own life, his daughter Josephine plays a more substantial role in the narrative for she, unsuccessfully, petitioned church and state to grant her father's dissected body a Christian burial. But, her mother Magdealena Kellerman, is barely mentioned.  This may be because there is very little known about Soliman's wife, but sharing this and suggesting why it might be the case would have been useful, especially as debates about the sources for Soliman's biography form an important part of the exhibition.

While Soliman was still alive, the Director of the Imperial Cabinet of Natural Curiosities, the Abbe Simpn Eberle, claimed Soliman's body for his collection.  Following his death, and without the knowledge of his daughter, Soliman's body was dissected, skinned and stretched over a wooden frame adorned with ostrich feathers and shells to be exhibited in an upright chest between two other Africans as representatives of the human race.  It was not until 1810 that Eberle's successor removed human exhibits to an attic storeroom in the Hofburg where they were destroyed by a fire which broke out during the 1848 revolution.

As the curator(s) explain, the bodies of healthy people were rarely displayed in this manner - Africans were the exception.  Still, they seem puzzled by Soliman's treatment which was 'not only inhumane but also anachronistic' for 'In Soliman's case, there was no scientific objective:  a distinguished man, who had perfectly met the expectations of European society as a successful court servant, was displayed as a 'noble savage', so becoming once again an object'.  It is hard not to infer from this that success, not his inherent humanity, should have spared Soliman the indignity of being stuffed and displayed like an animal.  Would Jakob Ali, Theresia Martin, or the two unnamed Africans who joined Soliman in the curiosity cabinets, not deserve the same sympathy?  Would their families have not also desired dignity for their remains? 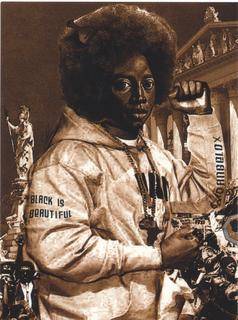 I am sure that the curator(s) did not mean to suggest an inherent inequality, but I think the caption reflects the need for a more serious examination of the histories of racism in the making and remaking of Europe.  In the introduction to our edited collection Belonging in Europe, Hakim Adi and I argued that historical research on the Black presence needs to develop a greater European perspective.  The Wien Museum's exhibition on Soliman adds further weight to that call.  Geographies of the black experience need to be placed in the context of their European neighbours where similar experiences of slavery and empire were in operation.  There is a need for an international network on the Black Presence in Europe to be developed so individual city dwellers like Angelo Soliman can become part of a collective European history.  The lack of such a network may explain why the exhibitions' section on nineteenth century African Vienna focuses heavily on representations from colonial Africa rather than individual black experiences formed in Vienna.

The Wien Museum has successfully created a space where (temporarily at least) diverse historical narratives can be shared and difficult questions raised.  Provided with examples of plays and performance-based interpretations of Soliman's life developed by political activists in Austria and Germany from the 1970s, visitors may consider the different readings of this historical legacy for themselves.  The detailed and extensive translation of the exhibition allowed me to access this information - how many English exhibitions consider translation an essential part of their presentation criteria?

The final section of Angelo Soliman in Vienna asks eight Africans living in the 21st century city to reflect upon his life.  In their filmed responses they consider Soliman's ability to create a successful life for himself far from his homeland alongside their own experiences of integration and acceptance, invisibility and difference.  Listening to their accounts, I felt that Soliman's paradox remains present in their lives.  As one woman observes, whatever his achievements and contributions to Viennese society, Soliman remained an African who could be treated with disdain.

References:  Caroline Bressey and Hakim Adi, 'Belonging in Europe' a special issue of Immigrants and Minorities volume 28, issues 2/3 July/November 2010.  Also published as Belonging in Europe: The African Diaspora and Work by Routledge 2010.