At a recent visit to the Museum of London I saw a fantastic collaborative exhibition Streets of Gold created by the arts organisation motiroti in partnership with the museum. Having previously analysed autobiographies of migrants who have explored mythologies of migration such as the 'streets paved with gold' and the 'promised land', it was fascinating to explore interpretations and engagements with these specific myths within visual culture.  Streets of Gold is engaging, beautifully-curated, and is revealing in the ways in which individual artists reflect on the history and legacies of London through museum artefacts - as a city built on migration,  with all the myths and silences within public memory this entails. As the exhibition's introductory panel states, 'migration has played a central role in the development of London. The city's history and culture reveal the many influences of the people who have made it their home.'

The exhibition includes the work of five artists (two of whom work together collaboratively), all recent migrants to London. Working with museum curators and historians, they explored the vast archive and collections of the museum in order to reflect upon items which had a personal impact and which provided a springboard for thinking through their and others' experiences of migration. These artefacts then inspired them to create new works of art, sometimes fusing reproductions of the museum items within their art and/or commenting on and re-interpreting the items and their relationship to contemporary London. The process was creatively directed by Daniel Saul from motiroti, with the aim to 'remind us that London is built on the dreams of newcomers, and that we should treasure fresh perspectives.'

Within the exhibition Alberta Whittle, a Barbadian artist who studied at Glasgow School of Art, reflects upon legacies and histories of imperialism in her work entitled see no evil, hear no evil, speak no evil collaging images of London and the Caribbean from the eighteenth century, contrasting them with video images of personal objects kept by migrant workers in contemporary London in order to remind them of home. Iranian artist Golbanou Moghaddas studied at both Tehran Azad University and then at Central Saint Martin's College of Art & Design in London. Moghaddas' resulting piece Between Water and Wind explores the central importance of the Thames for thinking about life in London, using the river's journey as a metaphor for the migrant and life journey. Juxtaposed with a reproduction of the Museum's print London from the Roof of Albion Mills (Frederick Birnie, after Robert Barker and Henry Aston Barker) and poetry of William Blake and Omar Khayyam, Moghaddas comments on her personal experiences of migrating to London.

James Voller, a photographer from New Zealand, had been previously interested in the social architecture of urban spaces and carried out research on how individuals rebuilt their homes after the Blitz and the mythology involved in rebuilding cities. He arrived in London just before the New Zealand earthquake devastated his hometown of Christchurch. In Redefinition he examined the photographic archives of the museum and incorporated some of the Blitz images within his visual art and included sound art from Londoners reading out the testimony of Christchurch residents, in order to comment on the Christchurch earthquake and his personal emotions involved in what has happened to his hometown. Theatre and performance artists Bojana Janković from Serbia and Dana Olărescu from  Romania look at the way in which ephemera of theatreland is forgotten in public memory, seeking to bring some of the forgotten written records of the collections to life. In Waste of Space, they worked with older people's groups in London creating visual and also sound art by reading out extracts from these works.

The exhibition uses museum QR codes to good effect, leading to sound clips on the Museum's website from both the artists and the creative director; here the artists not only reflect on the reasons and processes for choosing the pieces of artwork in the museum collections, but also provide another layer to their work by talking about their experiences of migration and home as well as how ideas of heritage have shaped their work as artists.

Social and digital media provides a further important element to this exhibition, as one aspect of the exhibition invites not only those attending the exhibition, but also people engaging through facebook and twitter to write to them answering the question, if they had migrated to London "when does London become home?"  The resulting responses then form part of Alberta Whittle's  artwork. 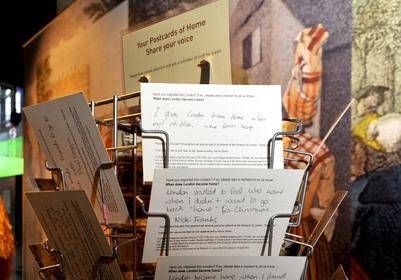 Exploring Alberta Whittle's work in more depth, I was particularly interested in her response to imagery representing slavery and empire and in linking this imagery to the phrase  see no evil, hear no evil, speak no evil. This linking serves to highlight how - similar to the mythologised visual representations of the Caribbean -  London has partially forgotten, romanticised or never truly acknowledged its role in empire, colonialism, and slavery.*  Whittle recalls in her sound clip the role London had in her identity even before migrating, stating "as a person from the Caribbean, much of my knowledge of myself and where I come from is that I am positioned against Britain. London is entwined with my history, even if I'd never stepped foot on her streets she would still be entwined with me, yet it appears to me that London has chosen to conveniently forget about where her story overlaps with mine." Whittle chose two museum artworks to expand upon this theme, both produced by migrants to London commenting on the social fabric of the Georgian-period: the romanticised imagery of the slavery-era Caribbean within A Negroes Dance in the Island of St. Dominica  by Italian artist Agostino Brunias and French artist Louis Philippe Boitard's satirical commentary on London's elite in Taste-a-la-Mode.  These works were then collaged together and additionally the image was produced as a postcard, providing the front image of the audience-participation postcards. 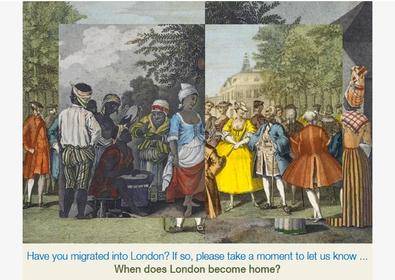 As we see, these artists all engage with the exhibition theme in diverse ways and significantly  their countries of migration all have different historical and contemporary relationships with London and Britain, which impact upon their migratory experience. Though there are common strands and the juxtaposition of the different artists works well, the exhibition doesn't try to conflate all migratory experiences as the same. The exhibition highlights, as Daniel Saul states in his sound clip, that "London's often described as home to many cultures - but it's not just host to many cultures, it is many cultures and those people have constantly defined and redefined London."

* For more on the role of slavery in the making of London see the Legacies of British Slave-ownership project at UCL - the first systematic analysis of the extent and significance of slave-ownership in the formation of modern Britain and London, Sugar and Slavery at the Museum of London Docklands.