Vasu Deva Sharma, an Indian student at the Royal College of Art, 1923

a guest blog by Nyay Bhushan 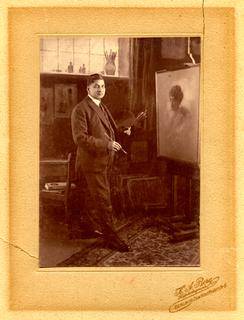 My great grand-father, Vasu Deva Sharma, studied at the Royal College of Art and graduated in 1923 with a diploma in decorative painting. Based in Lahore (then in undivided India, now in Pakistan), he was a professor of drawing and was offered an RCA scholarship. He was 39 years old when he sailed from Bombay (Mumbai) on the ship Kaisar-I-Hind on the P&O line arriving in London on September 25th 1920 (thanks to Gemma Romain for sourcing this information from The National Archives, UK - Incoming Passenger Lists, 1878-1960).

After his graduation, he travelled across Europe (France, Germany, Scandinavia, Greece and Italy) to study and practise art in various cities before he returned to India.

One of my project aims is to look for any surviving paintings and artworks related to my great-grandfather. The only document I have is his RCA student file which gives details about his progress as a student; the file also mentions his brief study visits to some provincial UK colleges but their names are not given.

From my initial inquiries at the RCA, they don't seem to have any other records or artworks related to Vasu Deva Sharma except for the graduation photo of the class of 1923, a recent and rare find for my project (special thanks to Neil Parkinson at RCA who also referred me to Drawing Over the Colour Line). Among his fellow graduates were Henry Moore and Barbara Hepworth along with Indian students Uday Shankar Choudhary and Mukul Dey.

Our family archives have a rare photo of Vasu Deva Sharma which was taken at a photo studio in Berlin, sometime in the mid to late 1920s. The picture is by a photographer named Karl Alexander Berg with his studio address at Joachimstaler Strasse. Looking at the stamp under the photograph one can see that Berg was appointed to a German court, without any indication which court this might be.

Another very significant point of interest is the connection between then RCA president Sir William Rothenstein (from 1920-35) and Indian art. Rothenstein took a keen interest in Mughal Painting and in 1910 established an India Society to educate the British public about Indian arts.

After Vasu Deva Sharma's return to India in the late 1920s, he practised art in Lahore and was a professor at Chief's College. He was also commissioned by some Indian royal families for portraits, such as the royals of Chamba (in North India).

From whatever family history I have researched, I am told that Rothenstein travelled again to India in 1944 and visited my great-grandfather at his mansion in Lahore which also housed his studio and artworks.

Vasu Deva Sharma passed away in 1946, a year before the partition of India and Pakistan following the end of British rule. His surviving family members, including his only son - my grand-father - and my father, were forced to flee Lahore in the wake of the partition riots and could not take his artworks and other belongings which were left behind in the mansion.

One of my main project aims is to look for any surviving artworks which could be in the UK, Europe, Pakistan and India.

Nyay Bhushan is an award-winning fine-art photographer and film-maker based in New Delhi. In addition to researching more about his family legacy, the project also offers transmedia opportunities, from a film documentary to an exhibition. To find out more about his work or to make contact with information about Sharma, please visit www.nyaybhushan.com