Obesity is associated with a higher risk of dementia up to 15 years later, finds a study led by Dr Dorina Cadar (UCL Epidemiology & Health) which suggests that weight management could play a significant role in reducing risk. 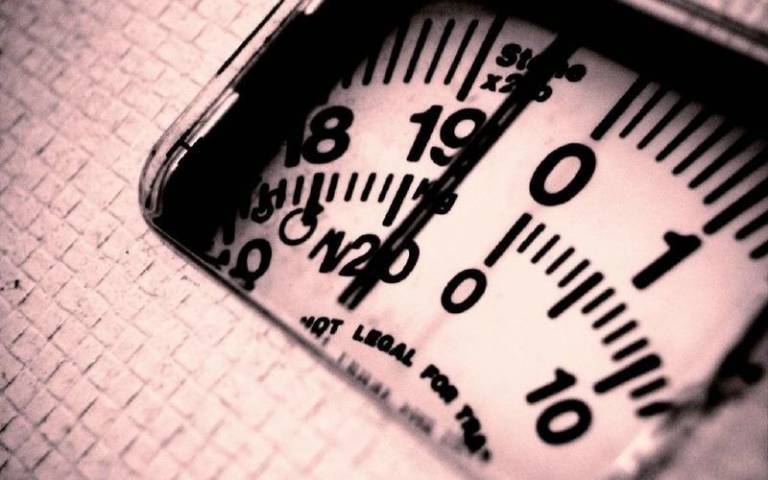 The findings, published in the International Journal of Epidemiology, suggest that people who are obese in late adulthood face a 31% increased risk of dementia than those whose body mass index (BMI) is within the ‘normal’ range. The risk may be particularly high for women.

“Both BMI and waist circumference status should be monitored to avoid metabolic dysregulations.  Hence, reducing weight to optimal levels is recommended by adopting healthy and balanced patterns of eating, such as the Mediterranean diet, appropriate physical exercise and reduced alcohol consumption throughout the course of the entire adult life span.”

Current clinical guidelines suggest that obesity is an important modifiable risk factor linked to individual lifestyle behaviours. But the association has remained somewhat unclear due to conflicting findings from different studies, with some suggestions that obesity could even be considered a protective health factor among older adults.

For the latest study, the research team collected data from 6,582 people in a nationally representative sample of the English population aged 50 years and over, from the English Longitudinal Study of Ageing. Three different sources were used to ascertain dementia: doctor diagnosis, informant reports and hospital episode statistics.

They found that people whose BMI was 30 or higher (at obese level) at the start of the study period had a 31% greater risk of dementia, at an average follow-up of 11 years, than those with BMIs from 18.5-24.9 (normal level).

There was also a significant gender difference in the risk of dementia associated with obesity. Women with abdominal obesity (based on waist circumference) had a 39% increased risk of dementia compared to those with a normal level. This was independent of their age, education, marital status, smoking behaviour, genetics (APOE ε4 gene), diabetes and hypertension – and yet this association was not found among the male participants.

When BMI and waist circumference were viewed in combination, obese study participants of either gender showed a 28% greater risk of dementia compared to those in the normal range.

Prior evidence suggests that obesity might cause an increased risk of dementia via its direct influence on cytokines (cell signalling proteins) and hormones derived from fat cells, or indirectly through an adverse effect on vascular risk factors. Some researchers have also suggested that excess body fat may increase dementia risk through metabolic and vascular pathways that contribute to the accumulation of amyloid proteins or lesions in the brain.

MSc student Yuxian Ma (UCL Institute of Epidemiology & Health Care), the first author of the study, said: “It is possible that the association between obesity and dementia might be potentially mediated by other conditions, such as hypertension or anticholinergic treatments.  While not explored in this study, the research question of whether there an interactive effect between obesity and other midlife risk factors, such as hypertension, diabetes and APOE ε4 carrier status, in relation to dementia will be investigated in upcoming work.”

Co-author Professor Andrew Steptoe (UCL Institute of Epidemiology & Health Care and Director of the English Longitudinal Study of Ageing) said: “Dementia is one of the major health challenges of the 21st century that could threaten successful ageing of the population. Our findings suggest that rising obesity rates will compound the issue.

“By identifying factors that may raise dementia risk that are influenced by lifestyle factors, we hope that a substantial portion, but admittedly not all, of dementia cases can be prevented through public health interventions.”