The Behaviour, Lifestyles and Uncertainty Energy model (BLUE) is a system dynamic model of the UK energy system that simulates future energy transitions and the associated changes to technologies, energy use and emissions. BLUE is conceptually aligned with the multi-level perspective on sustainability transitions in that it has landscape (government and the macro-scale socio-political environment), regime (the existing energy system) and niche (disruptive technology and lifestyle innovations) levels. Rather than relying on a single omnipotent social planner to allocate resources, BLUE is instead configured with multiple actors, each representing a decision-maker that is independently responsible for a single economic sector.

BLUE is designed to simulate multi-agent transitions and the behaviour of different energy system actors through time under conditions of deep uncertainty. Actors in the simulation are motivated by economic costs but their behaviour is also subject to other considerations, including:

BLUE simulates decisions taken in different economic sectors independently of one another, with each sector actor being responsible for capital stock replacement in their own domain. As capital assets reach the end of their economic lives and are retired, each sector-specific decision maker has a window of opportunity to replace assets on either a like-for-like basis or to switch investment into new technologies. In making these decisions, each actor carries out a value appraisal from their own perspective, attempting to minimise their overall costs without knowledge of how other actors in the energy system might respond to their actions. Each actor also makes their choices without advance knowledge of what future changes to landscape conditions such as fuel prices, social preferences, and technology performance/costs might be.

BLUE therefore captures the system level energy demand, emissions, and technological diffusion phenomena resulting from the interaction of the multiple actors across the model time horizon, which is 2010 - 2050. To account for parametric uncertainty, BLUE employs Monte Carlo simulation (with n=500 by default), which can result from any of the inputs, be they technological, economic, or behavioural. 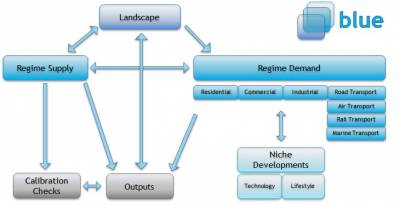 Documentation for BLUE is available here.