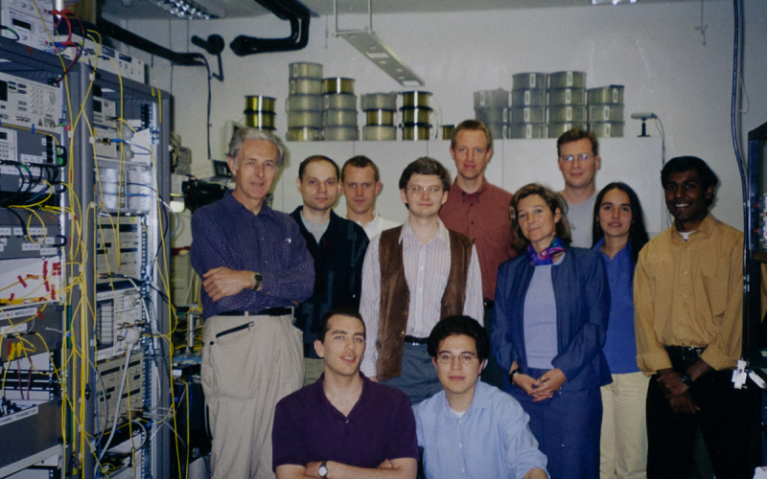 Professor John Midwinter, who has died aged 83, was our former Head of Department and Pender Professor. Working in the Post Office Research Laboratory (which later became BT Labs) during 1971-1984, John made enormous contributions to the understanding, design and development of the first optical fibre communications systems and their introduction into the UK network – helping the UK lead the world and establishing optical communications as a fast-moving and competitive research area in the process.

In 1966 Charles Kao proposed the idea that optical fibres, strands of glass as thin as a hair, could carry communications traffic, but the challenges to be overcome were huge, and most thought the idea preposterous.

A complete optical communications system involves more than just fibres, it needed the design of optical transmitters and receivers, the study of reliability of lasers used to generate pulses of light, techniques to modulate and demodulate data, and an understanding of the physics of propagation of optical pulses in glass.

John Midwinter, now as the Head of the Optical Communications Laboratory, set about to demonstrate a complete system, carrying live traffic. In 1977 they installed the world’s first optical fibre system, between Martlesham and Kesgrave, with members of his research team splicing fibres in the snow, sleet and rain, to successfully demonstrate the transmission of data at 140 Mbit/s over approx. 8km of fibre.

This was the start of the optical fibre revolution and propelled John and his research group to the forefront of international research. John’s book 'Optical Fibres for Transmission' (1979) became a bible for all those studying optical fibre communications.

The next problem was to significantly extend the length of these fibre systems – and this involved the use of mono-mode fibres – ones with a much smaller diameter core, supporting a single 'path' for the light to follow. This would prevent the data carrying pulses of light from spreading and allow much higher data rates over longer distances. This went against the conventional wisdom of the day, as it was thought it would be impossible to join such thin, fragile fibres. However, overcoming internal and international scepticism, by the early 1980s, John's group achieved this feat, demonstrating very first single-mode optical fibre system at 565 Mbit/s over cabled length of approx. 60km, a tremendous achievement at the time.

This work was so influential at BT that all work on competing technologies stopped, and in 1984, BT became the first telecommunication operator to entirely switch to single mode fibre systems. The rest of the world soon followed.

John would be amused by the current research debate about which types of fibre, and at what wavelengths, should be installed in future systems to maximise data transmission capacities!

When John left BT in 1984, he was presented with a small coffin containing samples of alternative transmission media, including mm waveguides and coaxial cables with an inscription 'Laid to rest by optical communications'. Immensely proud of what his team had achieved, he would bring the coffin to lectures, to both shock and surprise his students.

In 1984 John joined our department as the BT Professor of Optoelectronics, recruited by the then Head of Department, Prof Eric Ash. John now focused his research on exploring whether photons could be used to carry out processing functions to design, for example, an optical computer, setting up the Digital Optics Group, working closely with Professor Gareth Parry. The answer to this was "no": photons were excellent for transmission but electrons were better for switching and other digital functions.

By the early 1990s, John returned to optical communications, now exploring the use of WDM (wavelength-division multiplexing) and wavelengths for routing of optical information. John became Head of the Department in 1988 and Pender Professor in 1989 and in 1994 he also became Vice-Provost at UCL. John was calm, logical, efficient in all ways, encouraging and respectful of well-reasoned opinions.

A brilliant scientist, teacher and mentor

The concept of procrastination was alien to him and he valued the ‘can do’ quality in others. A brilliant scientist and teacher, a loyal colleague, undemonstrative and outwardly reserved, he was always direct, but also always supportive and generous with advice.

Working with him was a huge privilege, and one understood one was in the presence of a great man. He retired in 2004 as Emeritus Pender Professor, a title he 'wore' with pride. He was also very proud of the achievements of the Optical Networks Group, which he saw as continuing his life’s work.

We will miss him very much.

Professor Nick Doran is a former member of the John Midwinter Optical Communications Division at BT. He writes:

John Midwinter was, of course, an important part of my life. I would never have gone to BT without him and he, many times, provided opportunities and contacts for me.

I knew John as my 'boss'. He was an intelligent and honest man who was quietly authoritative but never bullying. He was always keen to recognise and develop talent and was thus an excellent manager of people. He was undervalued by BT.

It’s hard to think of anecdotes about John because he was so honest, straightforward and competent. He was the leader of R17 which was the division which (we thought) was the leading force in optical communications in BT. He made a clear bold push for the adoption of single mode fibres in the early eighties. I do recall once after he had given a clear and insistent presentation on this at Martlesham to senior BT executives one of them standing up and saying "we are going to be left with a lot of egg on our face if you are wrong". John’s reply was a sturdy and unwavering assurance that this would not happen.

I can recall Eric Ash telling me that John was going to join us at UCL shortly after I had moved from Malvern to UCL. I was delighted. He was, more than anyone, the person who had put optical fibre communication on the map both in the UK and internationally – and managed to persuade BT to take up the ideas; even single mode fibres when almost everyone was contented with multimode. UCL was a small but exciting place to be at that time. When John was elected to the Royal Society, he became one of five in a staff of 17 in the one department!

Having John around was a brilliant way for me to start my career in academia. We worked together on many grants and projects, and co-supervised students and postdoctoral staff. John was always direct, even controversial, in his views. We all knew John was an outstanding scientist and engineer but more than anything he taught me how important it was to look very critically at new ideas and not take ideas at face-value. It was a time when others, elsewhere, were suggesting that computers could be made that used light beams. Tempting though it was to follow that line, John would always insist on carrying out the calculations that usually showed the ideas were flawed. That lost him a few friends, but it made for some lively debates – which he loved!

John enjoyed travelling and it was always a pleasure to join him, be it to Europe, or more often to the USA. He was so well known that we were always made welcome in laboratories and in universities. It gave me excellent opportunities to network. He was a great companion on those trips. I recall he loved his huge US style breakfasts after a transatlantic flight, and I never understood how he remained so fit when the rest of us changed size and shape as we got older!

We will all miss John.