An international research team including Dr. Oleg Mitrofanov reports first ever observation of intersubband polaritons in a single nanoantenna in the current issue of Nano Letters. 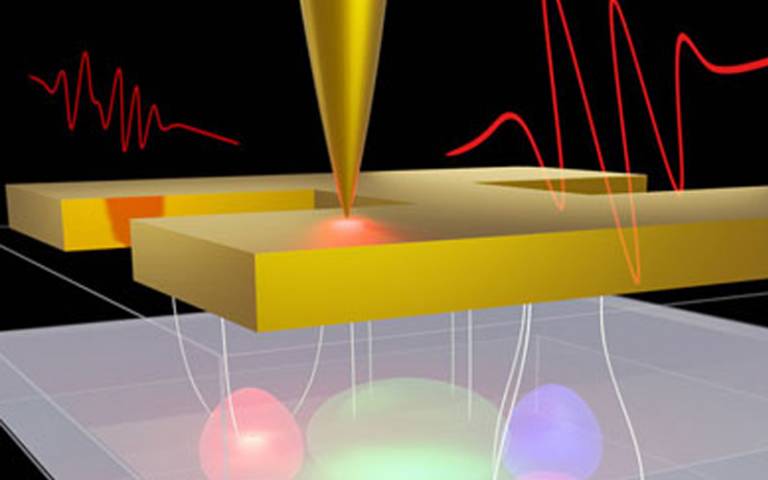 The researchers report observation of intersubband polaritons using only a single nanoantenna for the first time. This research is published in the current issue of Nano Letters.Polaritons are quantum states involving photons and matter excitations, in this case, an electronic excitation in a quantum well, which is one of the exemplary solid-state systems exhibiting quantum behaviour. Coupling of this excitation, known as the intersubband excitation, to the electromagnetic field can lead to significant modification of the material response and formation of polaritons. The physics of intersubband polaritons is relatively unexplored, and there is growing interest in studying this phenomenon.

The electronic transitions between confined states in a quantum well are widely used in optoelectronics, for example in quantum cascade lasers and in quantum well infrared photodetectors. One of the attractive features of this system is the tunability of the operating wavelength, which is achieved through design of the quantum well. It enables light sources and detectors operating from the far- to near-infrared. Polaritons can further expand functionalities of intersubband systems and enable a range of novel devices, such as polariton laser. However experimental difficulties with studying of intersubband polaritons have slowed down the progress in the field.

To investigate intersubband polaritons in a single nanoantenna, the research team that includes scientists in the Center for Integrated Nanotechnologies in New Mexico (USA), the University of New Mexico and UCL employed a scattering-type scanning near-field optical microscope (s-SNOM). By analyzing evanescent fields on the surface of the nanoantenna fabricated on top of a stack of quantum wells, they detected splitting of the nanoantenna resonance into two polariton modes, upper and lower polaritons. Dr. Mitrofanov says that this approach opens doors to investigations of ISB polariton physics in the single nanoantenna regime.

Development of the near-field microscopy concept was pioneered using radio waves by Sir E. A. Ash and G. Nicholls in the UCL department of Electronic and Electrical Engineering almost 50 years ago.

For further information see the Article in Nano Letters and a Spotlight report at Nanowerk.com