Congratulations to all who have recently been awarded their PhDs Many congratulations to our most recent PhD graduates:

Iraqi researcher Dr Saif Al-Arab Mohmmed successfully obtained his PhD for his thesis entitled:Investigations into the removal and destruction of bacterial biofilms by sodium hypochlorite irrigant delivered into an in vitro model.

"Saif utilised 3D printing to enable him to construct in vitro models of complex root canal geometries and to investigate the efficacy of different irrigation protocols used in the root canal treatment.

"This work now offers a way to investigate new endodontic protocols and their efficiency in eliminating bacterial contamination.

"We wish him all the best in his lecturing position in dentistry back home in Iraq."

Dr Md Ajijur Rahman was also awarded his PhD for his thesis on Detection and characterisation of integrons, gene cassettes and cassette-located antibiotic resistance genes in the human oral metagenome.

Primary supervisor Dr Adam Roberts said: "Ajijur has worked really hard over the last four years on a project where an initial discovery from a human metagenome was built upon, from the microbiological to the atomic level of detail, in order to test a hypothesis that he developed during his project on selection of antimicrobial resistance in oral bacteria.

"His work, funded by the Commonwealth Scholarship Commission, has resulted in several publications and he has presented his data on both sides of the Atlantic, winning numerous travel grants and the 2016 FEMS-ASM Mäkelä-Cassell Award.

"In testament to his industry, drive and commitment his PhD was awarded without corrections, a remarkable achievement and one which makes me immensely proud of him.

"I am looking forward to continued collaboration as he takes up his independent position at the University of Rajshahi, Bangladesh."

Primary supervisor Dr Adam Roberts: "Supathep has done exceptionally well during his PhD and it was a proud moment watching his degree being conferred.

"He worked incredibly hard during his time in my lab resulting in 3 first-author publications in the antimicrobial resistance field with another two almost ready to submit plus a series of awards for travel and academic excellence including one for from The Anglo-Thai Society for his research.

"I wish him well as he begins the next chapter of his life up in the Arctic as a Crøw, beyond the wall, at the University of Tromsø"

Primary supervisor, Dr Andrew Smith said: "The widespread use of sodium benzoate (NaB) in the pharmaceutical, cosmetic and food industries means almost everybody in the world being exposed daily to this compound.

"Currently very little is known about the effects NaB can have on the immune response, even though it has been associated with the clinical course of chronic inflammatory diseases, such as orofacial granulomatosis and neurodegenerative disorders.

"Andre was able to demonstrate that NaB has a major influence on the immune response due to the ability of the compound to scavenge free radicals, which are needed to fully activate inflammation."“His results suggest that NaB is not inert and has a major effect on a cells ability to mount an immune response.

"These important findings could have major implications in how NaB is used in the future and in particular if it can be beneficial as a treatment for chronic inflammatory diseases, such as diabetes, atherosclerosis, rheumatoid arthritis, neurodegenerative disorders, and so on.

"On the other hand, by disturbing the inflammatory response, NaB could have a negative impact on other conditions such as orofacial granulomatosis."

Dr Lucia Melita was awarded her PhD for her thesis entitled Development of nanomaterials applied to tissue engineering and cultural heritage conservation.

"The work developed a range of new nanoparticle materials that can be applied as a way of repairing defects in bone found in archaeological sites, but also as a way to prevent further acid catalysed degradation.

"A separate string to the work was also to develop collagen based materials impregnated with nanoparticles that could again be used to repair artefacts such as vellum, but also potentially as a construct for tissue engineering models.

"This work required her to gain a very broad range of skills both from a materials processing perspective but also analytical capabilities for characterisation, including using methods such as transmission electron microscopy and optical coherence tomography."

Most recently, Dr Mustafa Alqaysi gained his PhD for his work on the Development of phosphate based glass scaffolds for the repair of craniofacial bone.

"The work has culminated in a number of excellent papers and Mustafa was also co-author on a major review paper in Progress in Materials Science, with an impact factor ranking of twenty out of all journals." 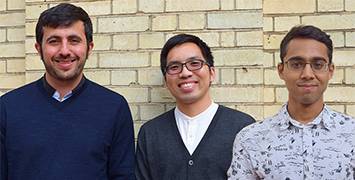