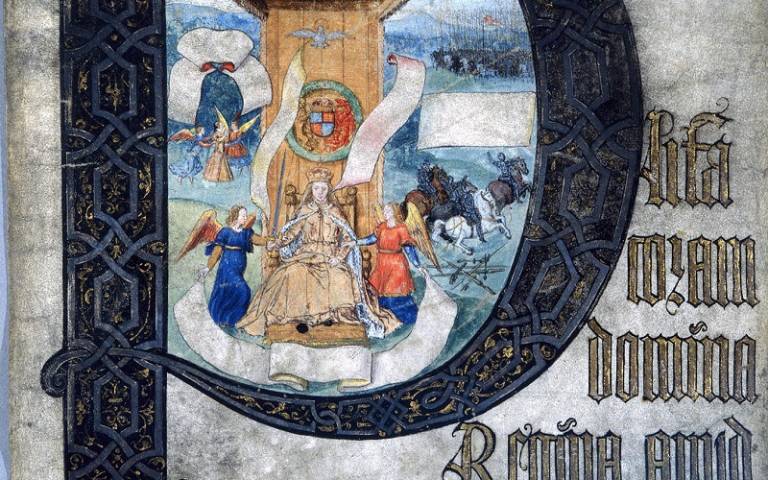 Mary I conference, with papers by Melita Thomas (UCL), Johanna Strong (Uni of Winchester) and Peter Stiffell (Uni of Kent). Followed by a panel discussion.

Join the event via Zoom hereMary I conference, with papers by Melita Thomas (UCL), Johanna Strong (Uni of Winchester) and Peter Stiffell (Uni of Kent). Followed by a panel discussion.

This is planned as a hybrid event with a limited number of 'in-person' tickets and a larger number of tickets for watching the event online. Please choose the appropriate ticket when registering: https://eme-mary.eventbrite.co.uk

John White’s sermon at Mary I’s funeral on 14th December 1558 is the testament of a man who attempted to describe England’s first crowned queen regnant. When Mary ascended the throne (1553) she faced a constitutional crisis: could a woman tainted with illegitimacy rule in her own right and create an image of female monarchy which solved the issue of succession? Though the politics of England’s first crowned queen regnant has been widely discussed, one crucial aspect remains to be illuminated: her portraiture. To cement the love of her people Mary needed an influx of imagery; the easiest way was through portraiture and coinage. The power of iconography was used by all of England’s kings; how would it evolve to mould a woman?

We know the myth of Gloriana, but even Gloriana had a foundation from which she worked, that of her sister and predecessor. Mary began with few examples of female English monarchy and yet in five years gave birth to the image of Maria Regina. Unfortunately, the epitome of this success was never implemented due to Mary’s untimely death in 1558.

This paper examines the image of Mary I through domestic and foreign portraiture and material culture to show Mary’s success as the first Queen of England. This examination of portraiture by using artworks by Anthonis Mor, Hans Eworth and unknown artists will show how the queen commanded imagery to create an image of monarchy not yet settled: that of a female king.

The Queen is Dead: Posthumous Representations of Mary I in Elizabeth and Jacobean Literature
Johanna Strong

The Queen is dead; long live the Queen! This statement, proclaimed at Mary I’s death and Elizabeth I’s accession to the English throne in November 1558, could equally be applied to Mary’s own legacy in the English and British historical narrative. Despite her death, Mary continued to loom large in the popular imagination, a figure of fear and tyranny used to legitimate and critique her successors, Elizabeth I and James VI/I.

Elizabethan martyrologist John Foxe wrote despairingly of Mary’s reign in his 1583 edition of Acts and Monuments, warning of the dangers of Catholicism to England, with new editions of his work printed at and after moments of heightened tension with Catholic Spain and with England’s own recusant population. Jacobean playwright John Reynolds used Mary as a Spanish Catholic mouthpiece in his 1624 Vox Coeli, or Newes from Heaven, a warning of what could happen if England once again allied itself to Spain in marriage, as Mary herself had done in 1554.

Mary’s reign thus posthumously became a byword for the dangers of Catholicism and the threat which the introduction to England of foreign influence posed. These fears increased when paired with early modern gendered expectations and understandings of Mary as a woman in a traditionally male monarchical role. This paper analyses the development of Mary’s posthumous legacy through the Elizabeth and early Jacobean periods by examining these two case studies, delving into the political, religious, and gendered contexts which inspired and encouraged the manipulation of memories of Mary I’s reign.

The Power of Networks and The Networks of Power: the foundations. Mary I’s early social and political networks
Melita Thomas

Historians have long been aware that monarchical power in the sixteenth century was rooted in personal relationships. In non-revisionist histories, Mary I is characterised as a woman of no political experience with little to no existing network, yet she led the only successful opposition to central authority between 1485 and the outbreak of the Civil War in 1642. More recently, historians, whilst giving Mary rather more personal autonomy and agency, still seem to suggest that her success was purely attributable to luck. Whilst it would be a brave historian who discounted luck altogether, my hypothesis is that Mary’s success was built on judicious use of her social and political network.

Whilst my research will cover the whole of Mary’s life, and consider what happened to her network after 1558, this paper will examine the network’s foundation from Mary’s birth until her demotion from de facto Princess of Wales to the King’s illegitimate daughter, in 1533. By examining Mary’s interaction with her network, it may be possible to deduce how conscious Mary was of it, and how conscious the members of her network were in how they aligned both with her and with others. Using the digital technique of social network analysis, which is widely used to illuminate power relationships, my research will delve into how the network was created and evolved over time, how Mary interacted with it, and who were its key members.