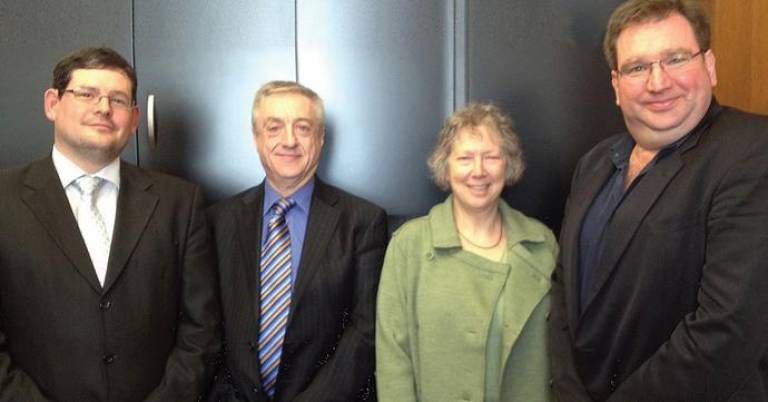 Dr Ádám Kósa, MEP visited DCAL on Thursday 8 March 2012 and had the opportunity to meet with UCL Vice Provost (International) Professor Michael Worton, DCAL Director Professor Bencie Woll and DCAL researcher Robert Adam. Born in Budapest of Deaf parents, Dr Kósa  holds a unique position in the European Parliament, having been elected as its first ever Deaf Member in June 2009. Trained as a lawyer, his first language is Magyar Jelnyelv (Hungarian Sign Language). He is also fluent in Hungarian and English.

DCAL Director Professor Bencie Woll said: "As an MEP Dr Kósa has focused a great deal of attention on the status of sign languages in Europe. In 2010 he hosted a conference at the European Parliament which resulted in the Brussels Declaration on Sign Languages in the European Union. The declaration set out principles through which sign language legislation can be brought forward right across the EU."

The DCAL meeting provided opportunities to discuss the importance of public engagement in research and building relationships with government in order to influence policy. It was followed by a presentation from Dr Kósa on the status of sign languages in Europe.