Each year UCL student societies present a fantastic range of high quality events including Musical Theatre, Jazz, Opera,  Dance, Film and TV. By working within a society to produce large scale productions, studets gain vital skills and experience through hands on co curricular training in a none classroom setting (with the support of Bloomsbury staff). These experiences are vital for students future job opportunities, personal development and developing communities/friendships. The Bloomsbury also represents a key part of UCL's core values of being an accessible, publicly engaged organisation that fosters a lifelong community.

Watch this YouTube video to learn more about being involved in the Bloomsbury theatre as a UCL Student.

UCL Alumni who credit the Bloomsbury Theatre as being crucial to their UCL experience and also their future career include UCL Film Soc president and OSCAR winning director Christopher Nolan (English Literature) and film producer Emma Thomas who were both ardent supporters of the Bloomsbury Theatre and its refurbishment. Nolan also filmed part of his film Inception in the UCL Flaxman gallery. Read here for Guardian article What An English Degree Did For Me where Nolan cites choosing to attend UCL specifically for its film facilities.

Katy Lipson (Human Genetics) is Company Director/Producer of her own theatre company Aria Entertainment which recently toured The Addams Family across the UK and Cruise in the West End. She performed as part of UCL Musical Theatre societies production of Cabaret.

Ric Lipson (Bartlett school of Architecture) founded the UCL Garage shows (now known as the Studio) and has worked at STUFISH (entertainment architects) since 2006, including building the ABBA Voyage Arena and designed for Beyonce, Elton John, Madonna, Lady Gaga and the Dehli commonwealth games.

Lizzie Bea (History) was an active member of UCL Musical Theatre society (2012 -2015). After graduation she went on to appear in the London Collesium production of Hairspray (2021) in the lead role of Tracy Turnblad alongside Michael Ball. Lizzie is about to appear in the West End musical production of Sister Act, alongside Jennifer Saunders and Beverley Knight.

Simon Whitaker (BSc Natural Science 2018) performed in various UCL Musicla Theatre society productions before achieving a place on the highly prestigious Royal College of Music Musical Theatre masters and is currently starring in the Phantom of the Opera in London’s West End.

Madeleine Edis (BA History of Art 2017) was involved as a producer, performer and most notably a costume designer, across various student productions and now works professionally in the costuming industry, working on West End shows and major tv productions including recent BBC success ‘This is going to hurt’. She is currently a costume designer at the National Film and Television School.

Natalie Pound (MSc Physics 2019) is a talented musician and musical director and was part of numerous shows in the Theatre and Studio for various arts societies, including the world premiere of the updated version of From Here To Eternity in the Bloomsbury Theatre. Natalie went on to gain a place on the Royal College of Music’s Musical Direction masters and now has a successful career in the West End as a professional musician and musical director including productions such as SIX! (Vaudeville), The Jersey Boys (Trafalgar Studios) and Legally Blonde (Regents Park Open Air). Natalie came back to campus on November 2022 to speak with current UCL Musical Theatre society students about how her Bloomsbury theatre show experience has helped her pursue a career in the West End. 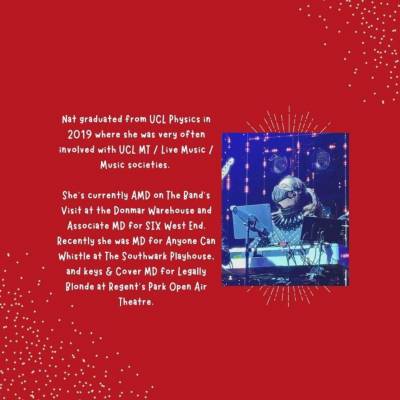 These dates are spread across the year and typically occur:

This usage is not free but it is heavily subsidised by UCL Culture.

Applications are made via the UCL Student Union here and not via the Bloomsbury admin team.

Do ensure you submit your application/s in line with the appropriate submittion deadlines.

For more information about how to run a UCL Student Union society event go here for UCL Bloomsbury guide for students.